Taking a Chance on a Big Vintage Calbee Lot 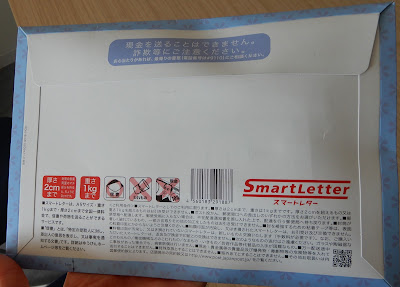 I'm not a gambling man.  I went to a casino once in my early 20s, lost 30$, failed to see the fun in it and have never set place in one since.  I've also lasted almost 2 decades in Japan without once having partaken in its peculiar and ubiquitous form of legalized gambling: Pachinko.

But I do have one area where I like to dabble in risk:  Buying big lots of vintage Calbee cards off of Yahoo Auctions.  When they come up they can be a really great way of getting started on a set or just familiarizing yourself with cards you've never encountered before.

They generally come in two kinds. In one kind the seller puts up pictures of every card in the lot, back and front, so you know exactly what you are bidding on and there are no surprises.  The other kind though are lots in which the bidder just puts up a picture of a pile of cards and tells you how many there are, but you have no idea what most of the cards are. These are the risky ones.

Back in Canada I would never in a million years buy a pile of cards without knowing what I was getting because of the obvious potential for being ripped off.  But in Japan.....I don't wish to perpetuate cultural stereotypes but Japanese people in general have a reputation for honesty for good reason.  When a seller puts up a lot of vintage Calbees without photos of every card in 99% of cases its not because they are trying to sucker you into buying a bunch of crap, its more likely that they are busy and just don't want to bother photographing everything.  These lots are usually worth taking a chance on.

I came across one lot from a seller (this guy) who I had never bought from before. The description just said "60 Calbee cards from the 1980s" and nothing else. It had a photo in which you could see about 7 or 8 random ones, the rest being underneath.  I did the math and put a bid on.  And won.  My winning bid was 2700 Yen, which with shipping came in just under 3000 Yen, or about 50 Yen per card.  That is a pretty good per-card price for 1980s Calbee, but of course that would depend on what the cards were.

They arrived yesterday and I broke open the Smart Letter pack to reveal these babies: 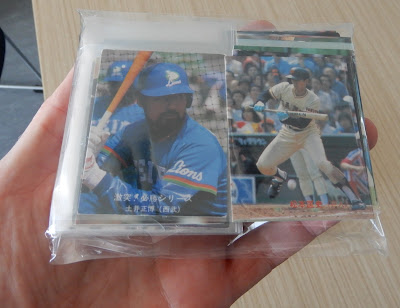 Happily the answer to all of these questions was negative.  I got a pretty interesting and well rounded lot when I broke it open, with cards from eight different years between 1980 and 1989.  Here they are sorted into piles by year: 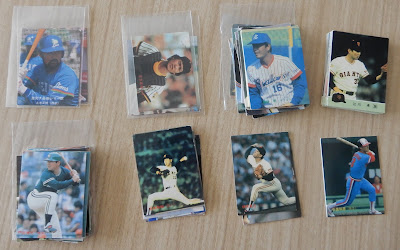 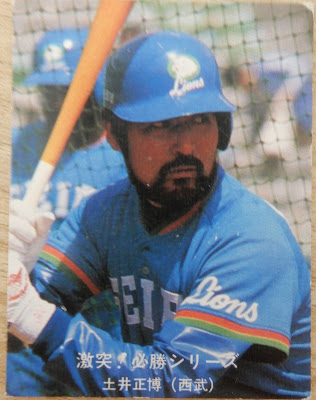 In the 1985s I found this card of Hall of Famer Hiromitsu Kadota which I found striking, I like that "ABIN 85" sign in the background. 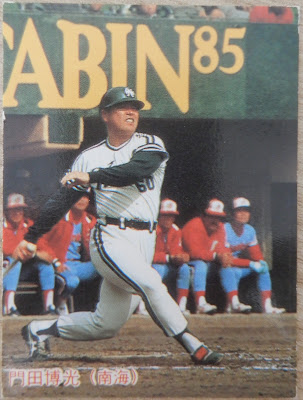 The 1984s had some pretty good stars among them too: 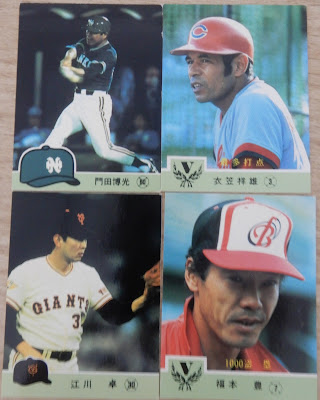 Condition wise the lot was pretty good.  About half the cards (basically all the ones post 1985) were about Ex-mint, while the earlier ones were a bit more mixed with some corner fuzz and the occasional ding.  Out of the 60 cards though there was only one true beater, this 1983 card of Mitsuo Tatsukawa which looks like it has been to hell and back: 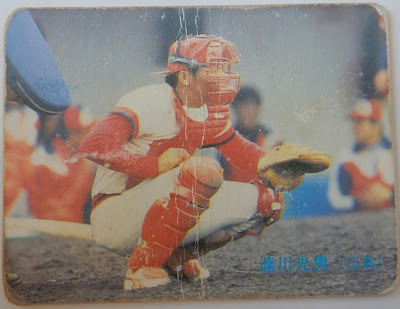 Within the lot there were only two duplicates (both in the 1983s) so I got 58 different cards.  Looking through my checklists 34 of those were ones I needed, which was pretty satisfying. 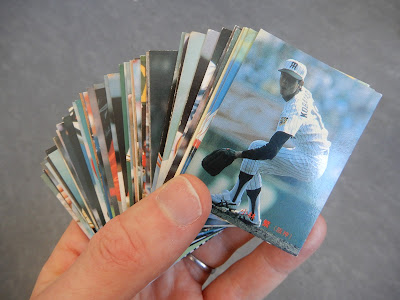 All in all I am pretty happy with this lot.  My gamble paid off!