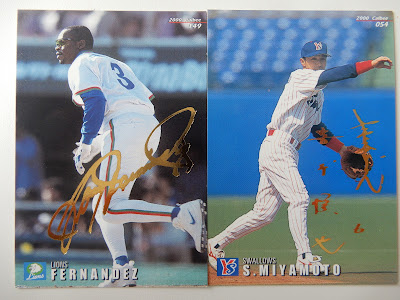 The 2000 Calbee set seems to be one of the easiest Calbee sets to put together.  I'm not sure why, but Calbee cards from that year seem to have been produced in higher quantities than other years and you can find big piles of them on Yahoo Auctions for pretty cheap.  This was also the last year that Ichiro appeared in a Calbee set, which probably stoked a lot of interest in it as he was rumored to be going to the majors, which might explain why so many were purchased back in the day.

Due to its easy availability this was also one of the first Calbee sets I was able to complete, basically through bulk purchases of lots.  Among my piles I have a few with gold signatures printed on the front, like Tony Fernandez and Shinya Miyamoto in the above picture.

I assumed these were insert cards, but I'm not totally sure as they seem to have also been issued in sets as mail in prizes.  They might have been both?  Sports Card Magazine doesn't mention them in their 2000 Calbee listing, and the usually thorough Calbee Collector also doesn't mention them in his write up about 2000 Calbee.  Looking at Yahoo Auction listings it seems Calbee issued similar parallels for the 1998 and 1999 sets as well.  Google searches just get me a gaggle of ads for irrelevant Calbee stuff.

Anyway, if these were just given out as mail in prizes....that is pretty awesome.  But I also kind of wonder how I came to have several random singles mixed in with the lots I have purchased over the years.....