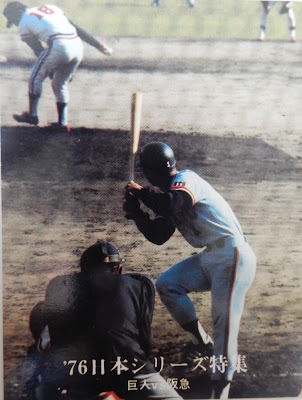 Over the past few weeks I've made a bit more progress towards completing my monster 1975 - 1976 Calbee set.  The above card, #1261, arrived in the mail yesterday from a Yahoo Auctions seller.  It was one of four that I bought to fill in checklist needs, but I think it is the highlight.

The card is one from the series that covers the highlights of the 1976 Japan Series. Think about that for a second, a card set featuring highlights of the 1976 Japan series released in....1976!  That is almost real time.  Its another cool thing about Calbee cards from the 70s, Topps World Series cards always featured the previous year's Series.  This sort of both highlights how good Calbee was at churning out cards in a timely manner and how lazy Topps was.

As the text on the back of the card notes, the 76 Series was an unusually exciting one.  The Hankyu Braves won the first three games straight and looked like they were cruising to victory.  But then the Giants fought back and won three straight of their own to tie the series.  They then.....lost game 7 and the Braves took the series.  In keeping with the heavy bias towards the Giants that permeates the Japanese baseball world, the text on this card says nothing congratulatory about the Braves performance and merely assures readers that Nagashima will manage his best to try to win next year.

The photo on the front of the card is what I really like though.  Sadaharu Oh about to swing at a pitch.  The angle from which the picture is taken is interesting, you almost never see baseball card photos taken from behind the umpire like that.  You almost never see dirt infields like that anymore either.

I'm a bit curious about the Braves pitcher, who is not mentioned on the card back.  He is obviously a side-arm thrower which makes me think he must be Hisashi Yamada, the Braves ace (and Hall of Famer) who threw side arm and appeared in the Series.  But every picture I've seen of Yamada shows him wearing uniform #17, while the pitcher in this photo is wearing #18.  So I am not sure who that is up there.

I hope to have a few more posts about cards from this set in the coming weeks, I'm making a concerted effort to plug holes in my want list!