Why is Yahoo Auctions Japan so Lazy? 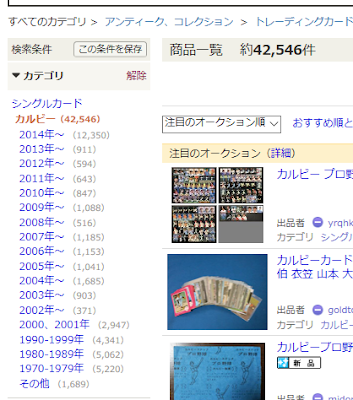 My first post of the new year and I'm using it to complain about a really minor but extremely irritating point!

The above grainy photo of my computer screen says it all.  This is the category list for all Calbee single cards available on Yahoo Auctions Japan.  I hate it so much because for some reason from 2002 to 2013 they divide the listings year by year, which is great.  Looking for a 2007 Calbee single?  No problem, they have a category for that.

Then for some reason in 2014 I guess they found making a new category each year was getting too tedious - I mean, god they must have to push at least 3 or 4 buttons to do that once every 12 months - and so they decided to just put everything after 2014 in the 2014 category.  They don't just do this with the Calbee cards but also with BBM and others.  It drives me nuts.

This is making a mockery of the whole system.  They average about 1,000 listings or so for each year from 2002 to 2013.  But the accumulation of 5 years worth of stuff has driven the 2014 category to 12, 268 listings which is just way too many to conveniently navigate.  It has become a pain in the neck to me since I have to search through that stupid oversized category every few months when a new Calbee series is released and I want to find lots or complete sets but have to wade through 5 times more stuff than I should need to.

My only consolation is that I am not a BBM collector - the 2014 category for them has bloated to 53,657 listings you'd have to manually go through to find anything issued in the last 5 years.

This is definitely a spoiled first world person problem, but it irritates me because the laziness is just left there for everyone to see.  They could have just hidden this decision to no longer list everything by year by creating a decade category.   But instead they left the old individual year categories up almost as if to remind you that they used to put some effort into organizing their listings but no longer deign to do you that favor, peasant card collectors.

Anyway, happy new year to everyone except those responsible for organizing the baseball card listings on Yahoo Auctions!