The Most Unusual Photo of a Professional Baseball Stadium Ever Taken 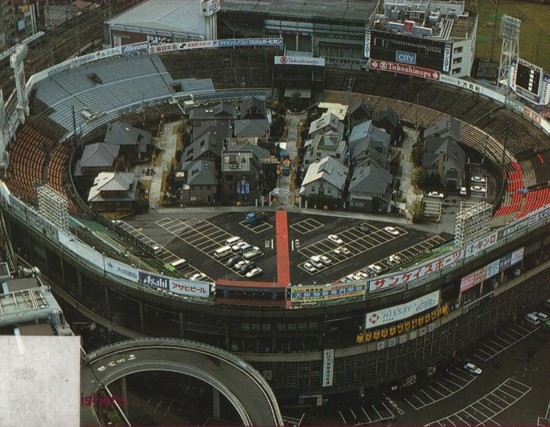 I Googled Osaka Stadium for no important reason just now.  Its the former home stadium of the Nankai Hawks until they moved to Fukuoka in 1988.  It was torn down in 1998 and the site is now the home of Namba Parks, a major shopping development (Dave visited on his trip a couple of years ago and did a great post about it).

In my Google search the above photo popped up and really caught my eye.  That is literally a residential neighborhood built right in the outfield of a very large professional baseball stadium. You don't see that every day.

I thought it must be photo-shopped or something but on further looking into it I discovered that no, in fact that is a real photograph of Osaka Stadium.  In the ten years between the Hawks leaving Osaka in 1988 and it being torn down in 1998 they had to do something with the field.  One of those uses was as a showcase for model homes.  So the infield became a parking lot and the outfield became a neighborhood with about 20 homes in it, albeit one nobody ever lived in.

Its a shame they didn't keep it like that.  I think living in a house located in shallow left field of a really cool old baseball stadium would be hard to beat!