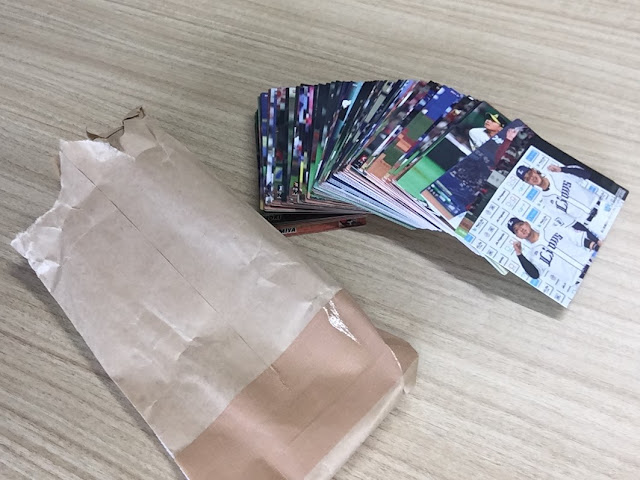 Calbee Series 2 has arrived!  Or actually, wait, no it hasn't.  Its weird.  According to Calbee itself the set isn't supposed to appear in stores until June 28th.  And I can confirm that the local stores here still don't have them.

Yet as I sit here typing this I do so with the full 88 card regular set right in front of me, so obviously some of them have escaped from the Calbee factory early.

This allows me to present the second 2021 installment of my thrice annual tradition I like to call "Complaining 'bout Calbee Photography".  So (cracks knuckles), let's begin.

First things first.  I bought this set off one of the re-sellers on Yahoo Auctions who buy up cases of Calbee chips to open them, hunt down the chase cards and sell them for major Yen.  They then offload everything else - the cards that are supposedly the main product -  for almost nothing.  So as a collector of just the regular cards when the new Series comes out its always a good time for me to pounce like a scavenger scoring the scraps leftover by an apex predator who feels his leftover scraps have no market value.

I was a bit apprehensive about this purchase because the guy I bought it from has the most insanely bad feedback rating I have ever seen on Yahoo Auctions - 75.8% positive (out of 171 total so its not like he's new to this and one or two bad ones brought him down).   The average feedback scores on Yahoo Auctions are about the same as they are on Ebay, basically if anyone has less than a 99.5% positive rating its enough to make you look through their transactions to see if they are on the up and up.  Less than 99.0% is a huge red flag.  75.8% is just off the charts insane.  This guy is an absolute legend among low feedback Yahoo Auctions dudes, nobody can touch him.

I pulled the trigger anyway because the price for the entire set was just 300 Yen (plus 210 Yen shipping), meaning I could get the whole thing in hand for under 5$ US, which seemed worth the risk.

Much to my surprise, the cards were sent promptly after I paid for them and arrived within two days!  All of them.

I could kind of see where that 75.8% feedback was coming from though, the cards were literally just tossed loose into an envelope.  No wrapping or anything, and it wasn't even a bubble mailer.  But they survived the journey without damage so I'm not complaining and he can expect a positive feedback from me shortly (which might push him up into 76% range or so).

So let me talk about the cards themselves.  Usually when I do a post like this Dave has already done one on the set so I don't talk about the basics, but since I got these early I can beat him to it this time!

The regular set contains 72 cards (#73 to 144, continuing on from Series 1).  I got all of those.  There is also a four card checklist set and a 12 card Opening Pitcher set, which I also received (meaning my 300 Yen purchase netted me 88 cards).  Together these would constitute the "base" cards.

In addition there is a 24 card "Star Card" set, which I don' t have but assume its covered in shiny glittery stuff like usual, and a 12 card special box limited set which features the top hitter from each team, which I'm not sure how it is distributed but also likely has a bunch of shiny glittery stuff on it.  There is also a 24 card parrallel set of the Star Cards featuring embossed signatures of the player.  These can only be obtained by sending in "Lucky Cards" which are randomly inserted in packs and are the real money makers for the re-sellers like the guy I bought mine from.

Anyway, now lets get on with what we've all been waiting for!  Me complaining about Calbee's photos!

Yup, they suck again this time around.  For those unfamiliar, I did a post a few years back highlighting the monotonous nature of Calbee photography which you can refer to.  The rules are that all position players except catchers are shown batting, all pitchers are shown hitting and catchers are the only position players sometimes shown actually in the field.  The photos are always framed the same way and are usually taken from the exact same vantage point in the team's home stadium.  Individually none of the cards have bad pictures on them, but collectively it makes for boring and repetitive looking sets.

2021 Calbee sticks to precedent pretty strictly.  I could only find 4 cards in the regular set which deviated from those rules, these ones here: 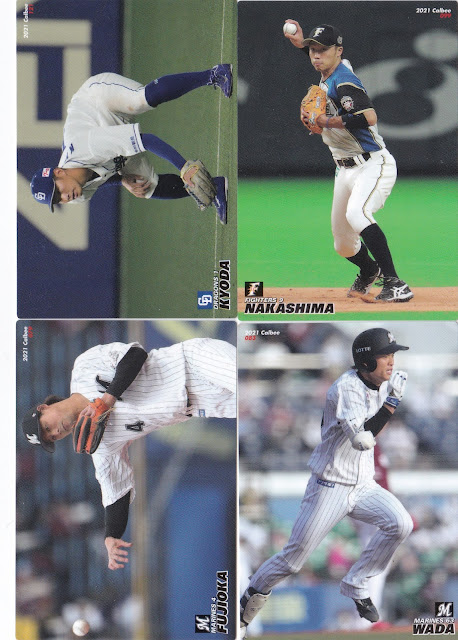 None of these are particularly exciting and the close up framing perpetuates the monotony even with these. So once again we've got a thoroughly mediocre Calbee set which makes me value my vintage Calbee cards with their lovely and varied photography all the more!

Anyway, if you enjoyed reading me complain about Calbee photography (and who doesn't enjoy that?) be sure to tune in to the blog in September when I'll undoubtedly be devoting a post to complaining about Series 3!