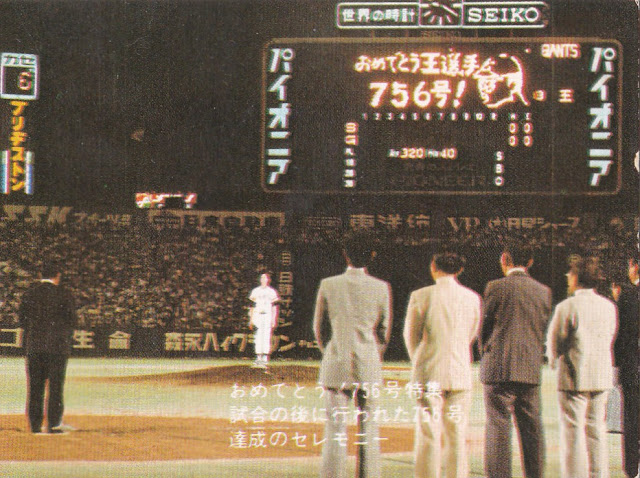 I picked this card up the other day. It is card #50 from a 1977 Calbee set dedicated to Sadaharu Oh in commemoration of his 756th home run.  I've written about this set before, its pretty scarce so I only had a couple of cards from it before adding this one.  I was pretty happy to win this one for a reasonable price given the apparent explosion in the price of some 1970s Calbee cards recently.

I liked the photo on the front of the card which according to the text on it is from the post-game ceremony held after he hit #756.  When I say "like" I don't necessarily mean that it is a great photo, but its an interesting one.  The player depicted, Oh, is dwarfed by the backs of four old guys in suits, who I assume to be Yomiuri executives.  Not many cards feature such an odd composition.

The highlight though is the cool shot of that scoreboard with the message "Congratulations player Oh for #756" and a crude rendition of his head next to it.  There are a few Calbee cards from the 70s which prominently feature that scoreboard in the background commemorating some major milestone, usually of either Oh or Shigeo Nagashima, which would make for an interesting collecting sub-set.

The back of the card is kind of interesting.  It shows the 15 pitchers who Oh hit the most of his 756 home runs off of.  The most were 23 he hit off of  Hiroshima Carp pitcher Yoshiro Sotokoba (who was elected to the Hall of Fame in 2013 (despite having a career record of 131-138).  This is only through home run #756, I'm not sure if Sotokoba maintained that lead through the rest of Oh's career. 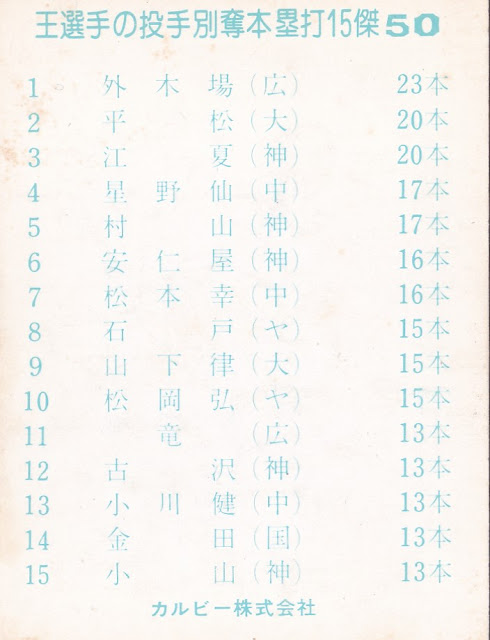 Anyway, its a nice addition to my collection!