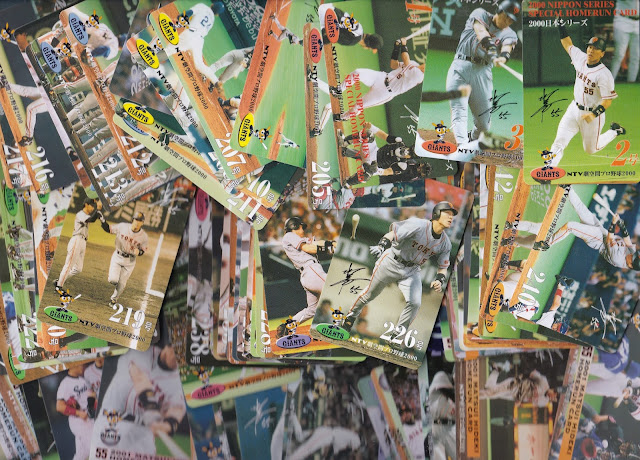 I picked up a pile of cards from a set I've found kind of intriguing: the NTV Hideki Matsui Home Run set.

The set features one card for every home run Matsui hit in his career.  The photos aren't generic, but rather are photos from the actual home run that they record.

Also interesting is that these weren't released as some sort of retrospective set after his career wrapped up.  Rather they were issued throughout his career as he hit more home runs.  I'm not sure how they were distributed, it seems they came out as sets each year rather than being sold one by one as he hit each homer (though I'm not sure on this point).  There are a lot of commemorative card binders floating around out there designed to hold cards from various years of this set, but I'm not super into special binders.

We should acknowledge how much of a gutsy move proposing this set must have been way back at the beginning of Matsui's career. For all anyone knew then he could have suffered a career ending injury or something early on and we'd have been left with this weird set of cards honoring a guy that only hit 64 career home runs that nobody remembers.  Fortunately that didn't happen and he actually hit 507 home runs between NPB and MLB combined.  When he moved to the Yankees the cards continued, only they had to be produced by Upper Deck which had the necessary licenses. 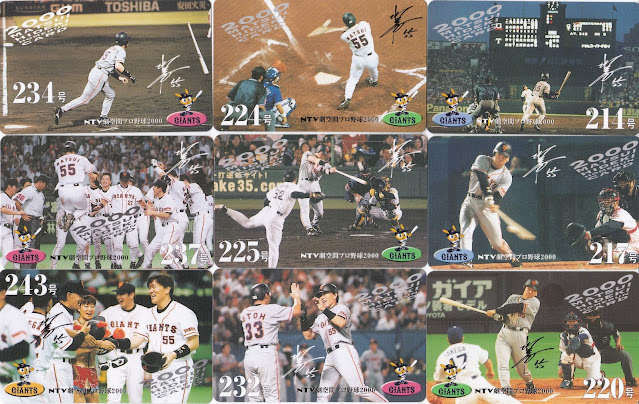 The cards I have all feature home runs from his 2000 and 2001 seasons, in which he hit career home runs #205 to #271.  The set also commemorates post season home runs, so I've got some cards featuring his home runs in the 2000 Nippon Series as well (this also means the full set is bigger than 507 cards).

It ironically means that a set which features only pictures of the exact same player is actually more engaging and less repetitive to flip through than any recent Calbee set featuring hundreds of different players.

I might try to track down a few more of these even though I'm neither a Matsui nor a Giants fan.  For  much older write ups (as in so old that Matsui was still hitting home runs at the time they were composed) on these cards you can see Dave's post here or Jason's post here.