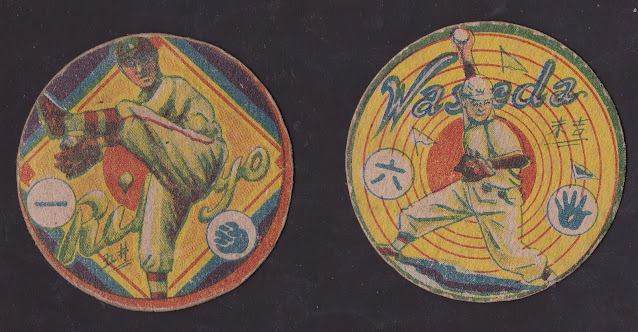 I added a couple of interesting new menko to my collection last week.  These are two cards from a previously unknown set featuring players from the Big Six University league in the late 1940s.

On the left is Kouzou Goi, a pitcher for Rikkyo University.  He was a star in his university days, and followed that up with a brief four year pro career from 1950 to 1954 with the Kintetsu Pearls (a descendant of today's Buffaloes) in the Pacific League.  Interestingly he split his time as a pitcher and a third baseman, putting in significant time at both as an early version of today's Shohei Ohtani.  Unlike Ohtani though, Goi never really shined in pro ball, posting a lousy 17-31 career record on the mound and a .258 career batting average at the plate.

The card on the right features Toshinobu Sueyoshi pitching for Waseda University.  Like Goi he was a university star who followed up with a short and not very impressive pro career, turning in three seasons with the Mainichi Orions (a descendant of today's Chiba Lotte Marines) from 1952 to 1954, posting an 8-12 career record (though he did make the All Star team in his first season).  As you can see from the picture, he threw side arm.

Its actually quite refreshing to find old menko of guys like this who were basically "commons".  Since most of the menko sets from the late 40s/early 50s contained maybe 20 cards tops, their checklists tended to be made up of guys who were future Hall of Famers (or at least Hall of Very Gooders) and you almost never find cards of journeymen pitchers with losing career records.  These guys squeeked into one on the basis of their university days, which is pretty cool.

It goes without saying that this set is rare, the copies I own of these two cards seem to be the only ones known.  So now we have a checklist of 2, I'm assuming there were more made.  Given the overlap of their university careers, the set would have to date from between 1947 and 1949.

And as with most sets from this era, I love the artwork on them.