Cards you can Wear 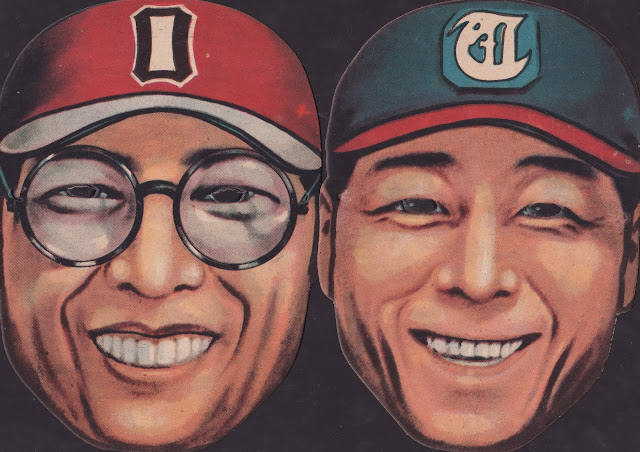 I think these are two of my favorite cards in my collection. They are from the 1949 set catalogued as JDM 2 in Engel and feature Hall of Famers Kaoru Betto and Hiroshi Oshita.

They are die cut mask cards which kids could wear on their faces.  The eyes are perforated and can be punched out, and there are little notches on each side near the ears where you can attach a string.  These are a bit easier to see from the back: 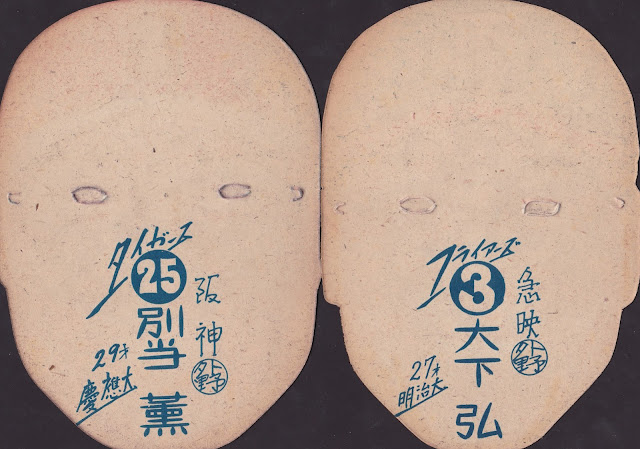 The size of the cards are a bit bigger than standard so while these would be very small on me, they might fit OK onto the head of a five year old.

Mask cards were a thing for a brief time in Japanese baseball card history, 5 different sets including this one (which contains 8 cards total) are known and all were issued either in 1949 or 1950.  After that they seem to have fallen out of favor.

The artwork on the cards from this set in particular is quite impressive, the images are much more realistic than what you find on any menko cards issued from that era.

Pretty much all of the mask cards are quite rare.  This set is listed as R3 (fewer than 100 copies known) while some of the others are harder still.

This might relate either to them being less popular among kids, or them being very popular among kids but also very fragile for a mask (the thickness of these is about the same as a regular baseball card).  I can't imagine these would have lasted long if a kid actually put them on.

If you think about it though baseball players are kind of an odd choice for a mask.  Watching my own kids they love to dress up in costumes and pretend to be various characters (characters from the Super Mario universe are their favorites these days).  When they do so they like to engage in play that involves doing whatever those characters do.

My kids aren't really into baseball, but if they were I couldn't see them putting player masks to the same use.  If they want to pretend to be a baseball player, they'll do that by playing baseball.  If they are playing baseball, a mask like this is going to be a major hindrance.  The two activities are mutually incompatible and thus the kids would have little use for these.

So while not great as a toy from a kid's perspective, they are SUPER AWESOME AMAZING from the perspective of a baseball card collector 70 years after they were made.