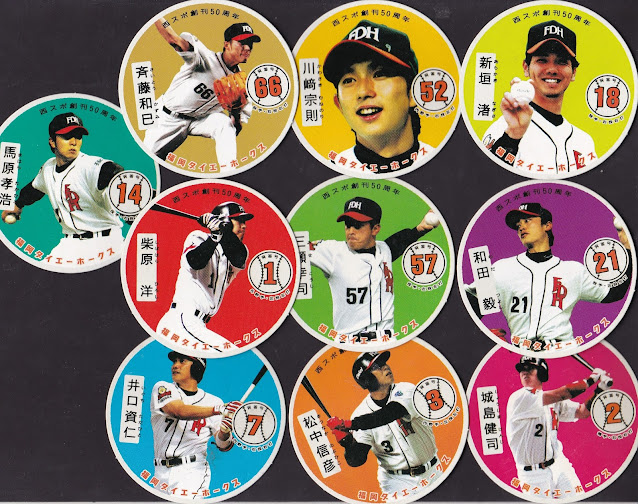 I've often wished that somebody would put out some modern menko sets done old school style.  My wish came true the other day when I discovered this set on Yahoo Auctions. Its a set of 10 round menko featuring players from the Daiei Hawks (who became the Softbank Hawks in 2005).

These were issued to commemorate the 50th anniversary of Nishi Nihon Sports, a sports newspaper published in Fukuoka.  The company was founded in 1955 which would suggest that these came out in 2005, but the backs contain the player's statistics from the 2003 season so I suspect these were released sometime in late 2003 or early 2004. 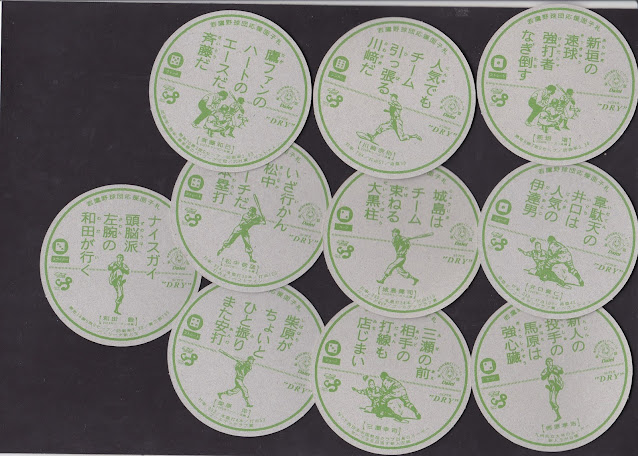 The Hawks were a fairly dominant team then (as now) so this set features a lot of star players.  This is the complete checklist :

Four of those guys (Wada, Kawasaki, Jojima and Iguchi) would later play in MLB while a fifth, Matsunaka, would win a Pacific League triple crown and probably could have played in the majors.

The lot I bought actually had a couple of loose sets and also one still in its original packaging: 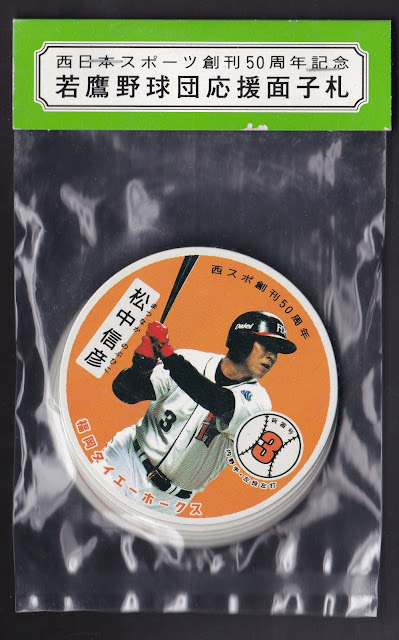 The top line of text on the pack says it is to commemorate the 50th anniversary of Nishi Nihon Sports, while the second line says it is a pack of menko to support the "Wakataka Yakyu Dan", which is a nickname for the Hawks.  The nickname, which is mentioned in the Hawks song, applies to the Hawks regardless of their corporate owner, so the current Softbank Hawks also use it.

I am a bit of a Hawks fan, which also motivated this purchase, though its kind of awkward.  I've spent a significant amount of my life in three different regions of Japan, each of which has a baseball team that I've supported basically on the principle of rooting for the home team wherever I live.  I spent four years living in Fukuoka and became a big Hawks fan during that time, and a lot of the players on these cards were still with them when I was there (from 2008 to 2012).  While I now root more for the Dragons simply because I live in Nagoya, I've never been able to get behind them as much as I did the Hawks (or the Tigers, who I rooted for in my five years in the Kansai area).

In addition to liking the Hawks I really like the fact that these cards look very much like "true" menko despite being quite modern.  The artwork is very reminiscent of old school menko, and the cardboard itself also looks like the old stuff. No shiny gloss or anything.  I love these.  It would be awesome if a maker did a whole proper NPB set of cards just like these.  For now though I'm satisfied with these 10, my first additions to the collection for 2021.