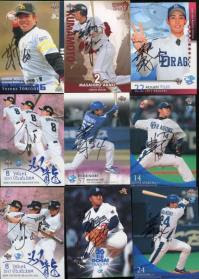 If you have ever looked for Japanese baseball player autographs on Yahoo Auctions you may have run into one prominent seller, sign1114306, who literally has thousands of signed cards up for auction at any given moment.

I`m going to recommend that you don`t buy from him.  At all. Unless you really like fake autographs, in which case bid away.

A lot of his autographed cards are sold in lots of 9 based on team (ie 9 autographed cards of Tigers players in one lot, etc). In the description of each lot he makes clear that he is only the consignor, the cards themselves were collected by an acquaintance who got the signatures from various sources including trips to ballparks and auction purchases.

The lots start with a starting bid of 3000 Yen.  If they don`t sell he relists them at a reduced price and keeps cutting the prices until they get down to ridiculous levels - 300 Yen per 9 card lot seems to be the minimum.

A few years ago when I was new to buying cards off of Yahoo Auctions one of his auctions popped up in a search I did and I was intrigued. It was a bunch of Tigers player autographs, including a signed card of Randy Bass. He has really good feedback on Yahoo Auction, 99.9% positive on (at the time of writing) over 38,000 transactions (only 9 of which were negative and only one of those raised any issue with regard to the authenticity of the autographs).  The price was cheap so I thought "why not?" and bid. And won.

My suspicions were aroused not by the cards themselves (I am not an autograph expert and they looked plausibly genuine) but by the sheer unlikelihood of one person being able to amass so many signatures - literally thousands and thousands of them in a never-ending stream of new listings - and sell them for so little.

Suspicion turned to certainty when I noticed the impossibility of some of the signatures.  In mid 2013 he put up one lot of Hankyu Braves players that included a 2013 BBM Foreign legends card of Brad "Animal" Lesley.  Animal passed away shortly after that card was released and had been living in a nursing home receiving treatment for the kidney ailment that (sadly) claimed his life for the entire time that card had been in existence. The likelihood of someone in Japan having taken that card, travelled all the way to the US, somehow getting access to the dying Animal Lesley and asking him to sign it, then returning to Japan and throwing into a random lot to be auctioned off for a few hundred yen was about zero.

Looking around the internet at the time, I discovered a massive thread (in Japanese) on 2 Channel devoted specifically to this guy. Its been up there for over 5 years now, has hundreds of replies and the bottom line is that this guy is well known as a faker (and has been for a long time).

The weird thing is, this guy has been running this blatantly obvious scam in the same way under the same account and with everyone being aware of it for years now, but Yahoo Auctions continues to blithely turn a blind eye to it.  After buying my cards and realizing I had been scammed (but only out of a few hundred yen) I just thought "lesson learned" and assumed he would be banned or arrested (the messages on 2 Channel indicate complaints have been raised).  So I was surprised to notice today, a couple of years after the last time I looked him up, that he is still in business with the exact same con running.

Yahoo Auctions is a pretty good place for some cards, but it is also well known to have a much weaker system of fraud prevention, weaker buyer protection, a weaker feedback system and weaker means of weeding out criminal activity than Ebay. So its worth bearing in mind that at least for player autographs it is rip-off city on that platform and buyer beware.