Masaichi Kaneda 1958 Marukami With a Weird Back 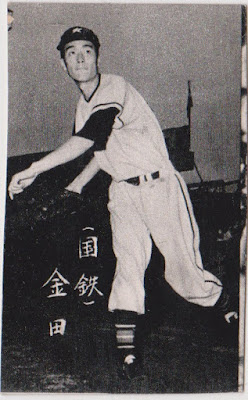 This is Masaichi Kaneda's card from the 1958 Marukami black and white borderless set (JCM 31D).

Kaneda is Japan's winningest pitcher by far, with 400 career victories (in a league where 200 rather than 300 wins is a de facto ticket to the Hall of Fame, a standard that Kaneda himself established for entry into his own version of the Hall of Fame, the Meikyukai).  Along with Oh, Nagashima and a few others, his cards are among the keys to the tobacco era menko card sets of the late 50s and early 60s.

The card is a hand cut menko and as you can see from the scan its got a bit of the card next to it on it. The miscut carries over onto the back, which has some additional odd things of its own: 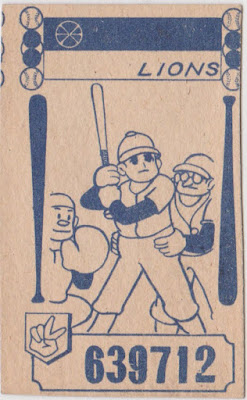 First off, the back is for the Lions, while Kaneda played for the Kokutetsu Swallows as correctly noted on the card front.  When I bought it I thought it must be a wrongback, but in his guide Engel notes that this is not unusual for this set, as the team name on the back rarely correpsonds to the player's actual team.

So its not a wrong back.  But then I looked up that number, 639712, which is how Engel lists cards in this set.  That number doesn't belong to Kaneda, whose cardback number is 333333. Rather it belongs to Yoshitaka Kosaka of the Hiroshima Carp.

So that means this is either a wrongback, or a variation, or perhaps cards from this set were issued with random backs not just in terms of team but also in terms of number. Engel lists this set as being quite rare (R3) and doesn't seem to have a complete checklist (he lists 45+ cards, indicating there are unknown ones out there) so he likely didn't have a huge number of examples to draw from when cataloging it.

Anyway, its kind of an interesting thing to find so I thought I'd put it out there!
Posted by Sean at 7:12 PM