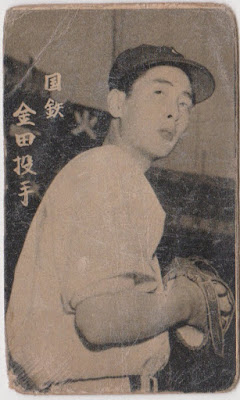 I've decided to get back into blogging a bit.  It really does help with the grieving process, mainly because Japanese baseball cards are one of the few areas in my life where I have no memories associated with my sister.  She didn't even know this blog existed.  Right now pretty much anything - like just listening to a song that she liked - gets me crying, everything is too new and I'm not emotionally adapted to life without her yet.  So Japanese baseball cards are kind of a mental safe haven, something I can distract myself with and not worry about that stuff.  I also really appreciated the friendly comments everyone made on my previous post, they do help!

Anyway, back to the business of this blog.  This is a menko of Masaichi Kaneda that I'd been wanting to post about for a while (even though I just posted about another one of him a few days ago).  Its from the set Engel lists as JCM 133.  They are identified by the backs, which have a picture of an animal (a mouse on Kaneda's) and a three digit number. 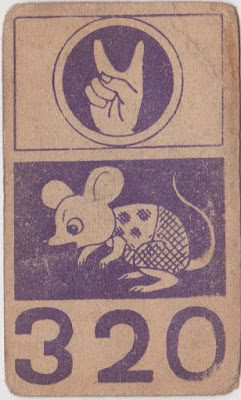 The set is kind of an enigma since so little is known about it.  Engel's guide identifies it as a set, but doesn't actually provide a checklist of it since "not enough of these cards have been discovered."  It was likely issued in either 1956 or 1957 and other than that there isn't much known about it.  A couple of other  sets (JCM 131c and JCM 132), which seem to have been issued by the same maker around the same time are also so hard to find that their existence is known but not enough have been found to create a checklist.

I love finding cards from sets like this where the card I have might be the only one left - its not clear if Engel or anybody else has seen a copy of this Kaneda.  They certainly might have, but the mere possibility that they haven't is kind of neat.   Its gives you that "Hey, this might actually be an important card I discovered" feeling.  And this card came in a lot of 5 cards that I only paid 1000 Yen (about 10$ US) for.  It was the only card from this set in the lot and the others aren't as rare, but I was pretty psyched at finding out what this one was.  Again demonstrating the ways in which collecting vintage Japanese baseball cards offers excitement that the US hobby hasn't been able to in about 40 years!

As a parting shot I just want to mention that I'll probably be putting the blog on hold again for a couple of weeks as I go home for the funeral and helping out my parents (and them helping me out too).  I'll probably be back towards the end of October though.
Posted by Sean at 6:13 PM