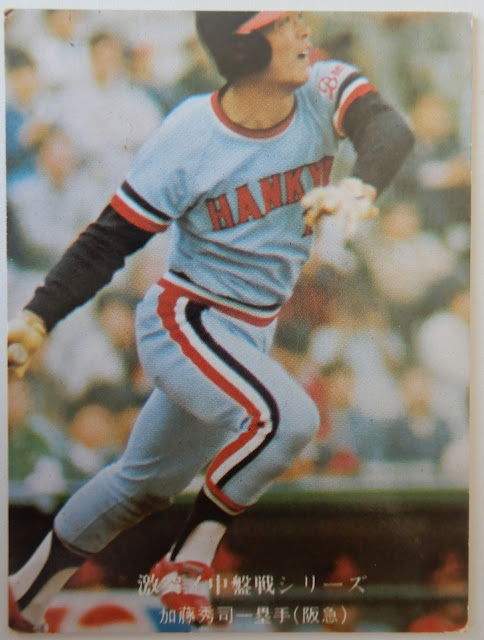 One of the cards from my 75-76-77 Calbee set that I've always been struck by is card 646 featuring Hankyu Braves first baseman (and 1975 MVP award winner) Hideji Kato.

Its another one of the 1970s Calbee cards which display photo centering decisions which are very hard to justify. Why is the top half of his head not on this card?  This isn't a miscut or even off centred card, I have 4 copies of this one and his head is cut in half on all of them (also note that the text on the bottom of the card is correctly positioned).

The Calbee sets from the 1970s have photography that blows anything Topps was doing back then away, but there are a few cards like this one where you wonder what was going on at Calbee.  Why didn't they just slide the photo down a bit so they could get all of his head in?  Was it that important to include his feet?  Or was this like an unusually egregious Billy Ripken 1989 Fleer type of deal in which Kato for some reason had an obscenity written on his batting helmet which nobody noticed until they were getting ready to make the cards and they panicked since this was the only photo they had of him and they just made do with what they had?

I don't know, but I do know that I feel very awkward whenever I see this card.