OMFG Don Mattingly is here! And I can't see him! 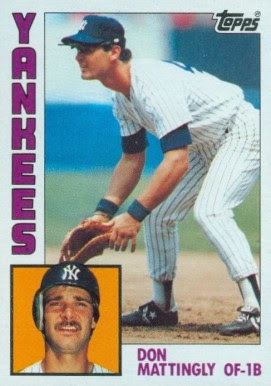 Don Mattingly was my favorite player when I was a kid in the late 80s/early 90s.  This is an understatement.  He was like a god to me.  My walls were covered with Mattingly posters and cards, my whole room circa 1989 was like a shrine to the man.  It was infectious.  I even became a devoted Magnum P.I. fan because Tom Selleck had a very Mattingly-like moustache.  That's how much I liked Mattingly.

But I never got to see him play live.  I watched Yankees games on TV all the time (even though as a Canadian my favorite team since I was 4 years old was the Expos) but that was as close as I got.

The year he retired (1995) was also the year that I graduated from High School and by then I wasn't into baseball cards anymore and, though I still followed the game and Mattingly, he had been reduced to something approaching mortal in my pantheon (largely replaced by a spiritual void that most former Mattingly fans carry to this day).

23 years later I'm on the other side of the Earth in a city, Nagoya, that nobody in their right mind ever comes to and I realize while reading the news about the 2018 MLB All Star tour of Japan something that blows me away:  The great one is COMING TO NAGOYA TOMORROW!

I hadn't really been paying much attention to the tour, but Mattingly is the manager of the team and tomorrow they are playing at the Nagoya Dome.  The Dome is just a couple of kilometres from where I am sitting right now as I type this.  I pass near it on my way to and from work everyday. Tomorrow, my former idol is going to be in that really ugly building that I mostly ignore as I ride past it.

My brain isn't really capable of processing this information right now.  I can't go to the game - no tickets and no time (got a baby at home and ton of work to do....) and I just feel like I'm missing something that was meant to happen.  I mean, how often are Don Mattingly and I going to be in Nagoya at the same time together?  Like except for the next couple of days, never.  Its weird.  I'm a grown up adult but the fact that this guy I thought was a god 30 years ago is going to be in the same city as I am has me thinking like an 11 year old again.  I mean:  Holy crap, Don Mattingly is going to be breathing the same polluted Nagoya air that I am for the next two days!  I can't go see him, but I'll take that any day!

Nobody else in the world could actually get me excited about simply being in the same city at the same time as I am but Mattingly.  And really I don't know anything about the guy except that he was a really good first basemen for about 6 years, and he was in a particularly good episode of the Simpsons.  OK, even that isn't true.  I have retained a TON of Don Mattingly trivia in my stupid head that I learned as a kid (like he used to own a restaurant called "Mattingly's 23"), but none of it really tells me anything of substance about what kind of person he is.  But who says you have to be rational about your favorite player when you were a kid? It is f'in Don Mattingly I am talking about!

Sorry, this post is a rambling mess.  I can't think straight. Don Mattingly is here!!!  Probably some other guys too but who cares about them?  DON MATTINGLY IS HERE IN NAGOYA!  Whoa!!