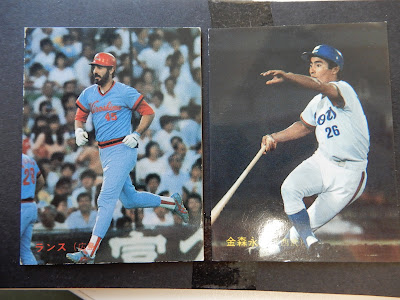 The 1987 Calbee set is getting closer and closer to completion.....yet despite years of effort the finish line remains frustratingly elusive..

According to my trusty hand-made checklist here: 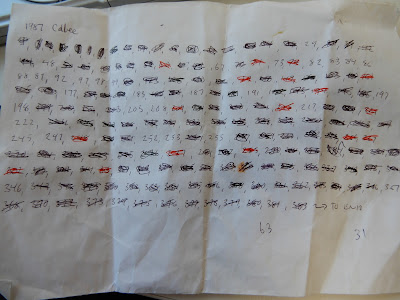 That leaves me 31 cards short of the full set, or 91.9% of the way there.  Except for my complete 1990 low number set, which at 55 cards is a relatively easy one, this is by far the vintage Calbee set I am closest to completing.

This is what the same checklist looked like 3 years ago when I made my last post about putting the 87 set together: 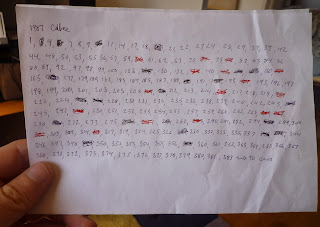 I was about 100 cards short of the set then, which means I have only added about 70 cards in three years.  The closer you get on these sets, the harder it is to find the few that you need.  There are usually 300-400 or so 1987 Calbee singles available on Yahoo Auctions at any given moment,though there is heavy duplication of some of them so you can probably find less than half of the individual cards and not one of my 31 out there.  When the cards I need pop up, I have to swoop down fast since a lot of the remaining ones are pretty hard to find.

I am hoping that this year will finally be the year that I complete this thing and shift attention to some other sets (1975-76 is another major Calbee project underway, but its nowhere near completion.  1984 and 1986 are also works in progress).  The 1987 set is a great one - cool photography and player selection throughout.  And it will be a major mark of pride to have put one together, there are probably only a handful of collectors out there who have done it so this is one of those little niches in the hobby where you can brag about stuff like that (in part because so few even bother trying, though this is legitimately a very hard set to piece together regardless).

Email ThisBlogThis!Share to TwitterShare to FacebookShare to Pinterest
Labels: 1987 Calbee