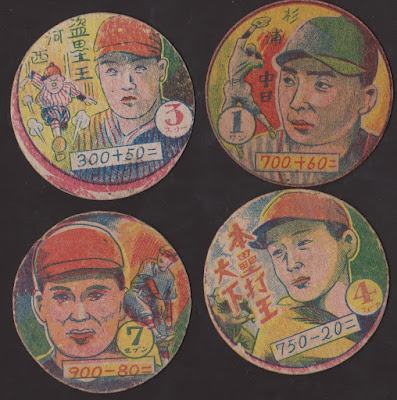 I have really been getting into the old menko cards from the 1940s-1960s era recently.  It is hard to resist their bold colors and simple designs.

I picked up the above four on Yahoo Auctions the other day and am quite pleased with them. I don't have a copy of Engel's guide (it is on my shopping list....) so I don't know which set they are from but they seem to be from the late 1940s as the one in the upper right corner features Kiyoshi Sugiura as a member of the Chunichi Dragons, a team he played for between 1946 and 1950.

The cards are numbered (I have 3, 1, 7 and 4), are printed on fairly thick card stock (since they were meant to be thrown at the ground) and display varying information about the player.  Sugiura in the upper right is the only one which identifies his team.  The one in the upper left features Toshio Kawanishi, who played for Nankai and Osaka between 1946 and 1955.  The card has his name and "Stolen base king" on it, which is appropriate since he led the league in stolen based three years in a row from 1946 to 48.

I don't know who the player on the lower left card is since it has no name or other information on it, though you can tell from the picture that he is a pitcher.  Next to him is Hiroshi Ohshita, who played for the Flyers and Lions between 1946 and 1959.  He is identified as the "home run king", presumably in reference to the fact that he led the league in homers three times.  He is the biggest star in this group (well, at least among those I can identify), leading the league in numerous categories throughout his career, winning the 1954 MVP award and being inducted into the Japanese baseball Hall of Fame in 1980.

You'll note that each card has a box with some numbers in it just below each player's chin.  It took me a moment to figure out what the significance of those were, they seem to just be math problems that kids were meant to solve.

One interesting piece of social history attached to these cards is that they were (likely) issued during the occupation period (1945-1951), during which Japanese society was at its poorest in modern history and at times bordering on famine.  These pieces of cardboard would likely have been the most valued plaything of whichever kid owned them since all the other materials toys are made of (metal, wood, etc) were being requisitioned for  more urgent needs.

If you think about that, it makes these cards pretty unique in baseball card history.  American kids who collected cards at the same time (say early Bowman or Topps sets) no doubt cherished their cards, but unless they were really poor they probably had other toys to play with as well. The same holds for Japanese kids from the mid-1950s onwards, when the Japanese economy took off and people had money to buy toys for their kids again.

So these cards likely weren't just a plaything to their owner, they were the plaything.

The closest parallel I can think of would be American cards during the depression, like the 1933 Goudey set, which also might have been the only plaything of the kids who owned them.  But even in the depression American society wasn't facing the same dire situtation that Japan did in the immediate post-war period - where people were literally starving to death on inadequate rations and the economy had completely collapsed.