The Greatest Baseball Card of all Time? 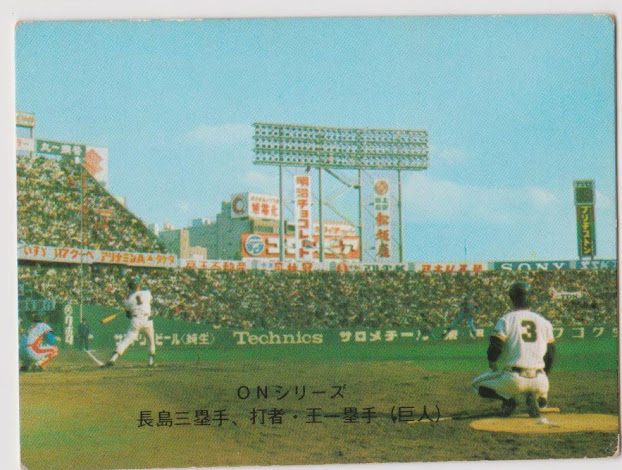 One card that I have been hunting for a while is #416 from the 1974 Calbee set.  It first caught my eye when I saw it in an auction a few months ago.  I put a bid on it that was a lot higher than what the then current bid was, and then went to bed.  And woke up in the morning to discover someone had sniped me on it.  I've never felt so much regret about losing a card in an auction (admittedly this is not a major thing in life to feel regret about, but it was still noticable).

In the months since I have been regularly checking to see if one came up, but I had to wait until last week for another one to appear.  When one finally did, with a 1000 Yen start bid, I put a much higher bid on it this time...and won!

I think one can make the argument that this is the most beautiful baseball card ever made.  The photograph is perfect.  Shigeo Nagashima crouching in the on-deck circle while Sadaharu Oh takes a mighty swing against a Dragons pitcher.  Korakuen Stadium is packed because this was taken on Nagashima's last game.  The crowded bleachers, the lights and the billboards make the perfect backdrop.  The color of the card is perfectly balanced too, the top half blue sky, the bottom half green walls, grass and dirt infield.  I have never been so taken with the photograph in a card before.  In some ways it is similar to #404 in the same set, which was taken during the same game and shows Nagashima walking off the same field.  I love that card too, but like this one better - its got both Nagashima and Oh in the same picture and is a bit more exciting to look at.
Posted by Sean at 7:03 PM