Finding Cards in the Most Unexpected of Places 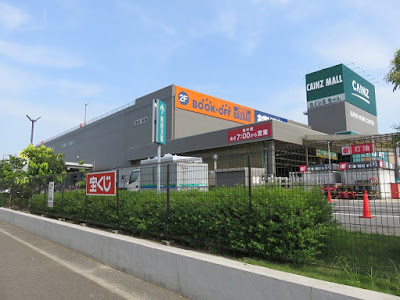 Last weekend my wife and I took our son out to the above Book Off Bazaar way out in the southern suburbs of Nagoya.  It is by no means an attractive location to spend a Saturday afternoon, but Book Off Bazaars are a very good place to go if you have kids since some of them, including this one, sell a lot of used toys, children's books and clothing for very reasonable prices.

My son walked away from this with a new shirt (boring!), a book about dinosaurs (better) and a toy race car (awesome!).

Unexpectedly I also walked away with something: a big pile of 1991 and 1992 Calbee cards! 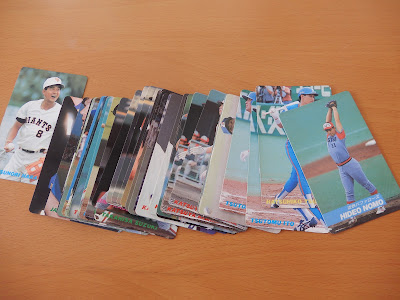 This was a really cool find for me.  I was looking through racks of toys with my son when I discovered a bunch of lots of baseball cards, wrapped and put into little baggies containing 10 cards for 100 Yen.  Most of them were stuff I wasn't interested in and likely not worth 100 Yen for 10 cards (beat up BBM commons from recent years, etc), but I was quite excited to find that six of them were full of Calbee cards from the early 1990s (which are worth way more than 100 Yen for 10 cards), so all of them went into the shopping basket.

It was kind of cool opening them since except for the top and bottom card the contents were a mystery.  I wasn't disappointed with what I got, there were quite a few stars in there, including a 1992 Hideo Nomo that alone was probably worth more than I paid for everything.

It was kind of fortunate that these happened to be cards from the early 1990s when Calbee sets had round instead of sharp corners as these would likely all have had dinged corners from being thrown into baggies and tossed haphazardly onto a rack subject to the ravages of bargain hunting suburban children and their parents (the most destructive force on the planet incidentally).  So all the cards were in very nice shape.

If I had bought these anywhere else I probably wouldn't have been so excited about them, but there is something very thrilling about finding somewhat hard to find vintage cards in a totally unexpected place for an extremely cheap price!