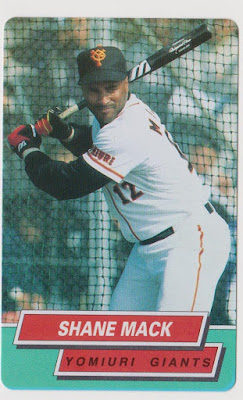 Shane Mack is one of those names I remember from my high school days.  He had a brief period in the early 1990s where he arguably attained the status of minor star with the Twins, playing a key role in their memorable 1991 season.

After his days with the Twins he played for a couple of years in Japan with the Giants and has a card in the 1995 Tokyo Snack set (the de facto Calbee set from that year).

The front of the card is pretty cool, showing Mack taking batting practice.  The back though is strange: 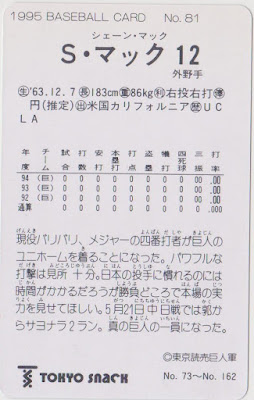 It gives his statistics from the 1992-1994 seasons with the Giants.  Its not very impressive, he went 0 for 0 in each of those seasons for a cumulative .000 batting average.

The reason for this lacklustre performance is that he didn't play for the Giants in any of those seasons, he was still playing for the Twins in Minnesota. But the card clearly says "巨" next to each of those years in brackets, which is the kanji for "Giant".

It definitely gives him short shrift as in the 1992 season, where he hit .000 in NPB, he also hit .315 for the Twins and finished 5th in the AL batting race.

Anyway, this is just a kind of odd thing, I have no idea why they did it.  Other cards in the set with new players don't have 3 years of fictitious statistics on the back.  One possible explanation is that this set is one of the first Calbee sets where they featured a player's full career statistics (maybe the first? I have to double check that).  Perhaps, being new, they simply weren't very good at it.  This is evident in the confusing order they put the stats in, with the most recent season at the top and going down from there, the opposite of what pretty much all other card makers do.

The card incidentally seems to have been released relatively late in 1995 as the text on the back makes reference to a game played against the Dragons on May 21st in which he hit a 2 run sayonara home run.