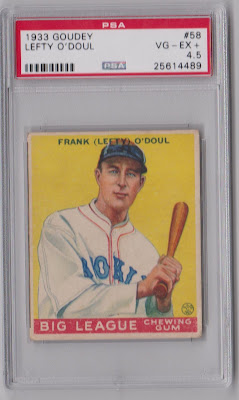 I finally picked up my first card from the 1933 Goudey set the other day.  It was an Ebay auction purchase from PWCC.

I decided on O'Doul to be my big intro to the 1933 set (and likely my only card from it given the prices) because he is such a big figure in Japanese baseball history.  He has two cards in the set, I much prefer this one in part because it has a more attractive image of him in his Dodgers digs and in part because it actually mentions his contribution to Japanese baseball on the back:

"Last winter went to Japan and taught batting to University of Tokio players.  Likes to play golf and does it well."

Finding American cards which mention Japan like that might be an interesting (and difficult to catalogue) collecting goal.

O'Doul is the holder of one interesting MLB record.  He has the highest career batting average (of players with more than 3,000 ABs) of anyone not in the Hall of Fame.  He was a 349 career hitter, which is absolutely insane, but did that within the span of a relatively small number of extremely dominant seasons.  When you add to that his importance in promoting the connections between the Japanese and American games though I think he might be worthy of consideration for the Hall.

This one is a nice mid-grade one.  Its graded by PSA, which I am not a huge fan of but I think I will leave it in that holder for the meantime since he is basically safe in there.
Posted by Sean at 11:48 PM