Oh what a swing. 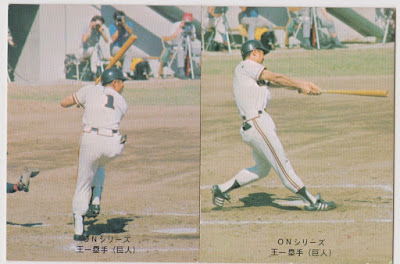 I am kind of a fan of cards featuring Sadaharu Oh's swing and his distinctive stance.  Mainly because he used them, usually in combination, to hit a baseball a lot. The above two cards are #418 and #420 from the 1974 Calbee set, both from the "ON Series" (O for Oh, N for Nagashima = ON) which fall into this category.

They are kind of cool because they were obviously taken during the same at-bat - the three photographers visible in the upper background are all in identical positions and poses in each so they likely display different instants in the same swing of the bat.  The cards themselves make no mention of this fact, card #420 describes his "flamingo" stance while #418 just says this is Oh taking a full swing. He is in a home uniform but these weren't taken at Korakuen, so I assume they were taken during spring training.

My collection is currently missing the card that numerically falls between these two (#419), I am curious if it features another shot from the same at bat, with his swing about halfway between the two. It would be cool if it did, having a series of cards going through his whole swing would look really neat displayed side by side.

So finding that card is my collecting goal for this month.