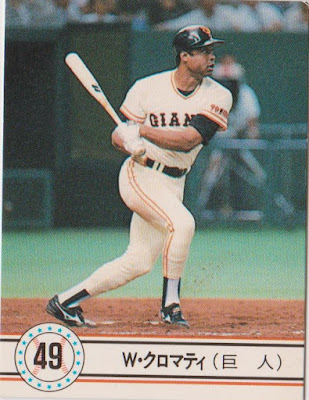 As I mentioned a few months ago, the first series of 1990 Calbee cards are the first (and thus far only) of the vintage Calbee series that I have completed.  Though its still a bit hard to track down singles, the 1990 first series is the easiest of the Calbee mini-era sets to complete owing to the extremely small number of cards in it (55, though if you are going for the entire 1990 set there are actually 217 cards, but from #56 up they are bigger dimension cards and thus not technically part of the mini-era). It also helps that there aren`t any super rare single prints to track down.  Most singles can be had for $1-$3 each (depending on condition), so its also pretty affordable.

One of the more interesting cards in the set is #37, Warren Cromartie`s last Japanese baseball card.  He was coming off one of his best seasons, having hit .378 and won the Central League MVP in 1989,   but his production tapered off considerably in 1990 and it turned out to be his last in NPB.

His career is kind of an interesting reverse example of the "washed up MLB players go over to Japan" stereotype.  When he came over to the Giants in 1985 he was still in the prime of his career and had been a pretty decent starter for the strong Expos teams of the late 70s and early 80s.  Then, when his career in Japan was in decline, he actually went back to the majors and had a really good year with the Royals, albeit in  a part time role, hitting .313 in 1991 before retiring.

Cromartie has a lot of really great cards from the late 1980s Calbee sets, many of which have him in interesting poses.  This is the only one of him that has a design other than the sort of standard full-bleed photo Calbee design of the 1980s, which makes it kind of unique.  The border on the lower part of the card, with his player number in the big circle, looks pretty cool.

Cromartie is also the only one of the big name foreign players from the 1980s who appears in this set.  Randy Bass had already left NPB by that point and Boomer Wells, though he was still playing in NPB, isn`t in this series (though I think he appears later in the larger sized Calbee upper number series from this year).  The only other foreign players with a card in this one are Ralph Bryant of the Kintetsu Buffaloes (#43) and Matt Keogh of the Hanshin Tigers (#41).