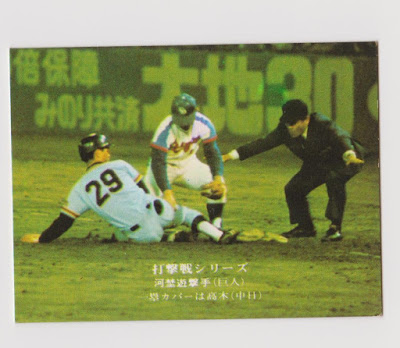 I picked up a few more cards from the 1975-76 Calbee set the other day, mostly from the Dagekisen Series (Slugger Series might be the best translation) subset.

As I have mentioned before, I absolutely love Calbee cards from this set.  It comes about as close to a perfect set as they go - full bleed photo with fantastic photography throughout (all the more impressive when you consider there are almost 1500 cards in total).  The kanji on the front of the card add to the appeal, while not being overly obtrusive on the image.  The set also has the advantage of probably being one of the most difficult in the world to collect owing to its size and the scarcity of some cards in it (in fact all the cards in it are, while not necessarily rare, also not particularly easy to find either).  I guess that last thing might be a questionable benefit, but the point is that as a collecting challenge it can keep you going for years on end (without necessarily breaking the bank if you are in Japan, until you get to the point where the expensive ones are all you have left on your want list).

This one card above is number 774, it pictures Kazumasa Kouno of the Giants sliding safely back into first base under the tag of the Dragon`s Morimichi Takagi.  According to the card back the next batter (Horiuchi) grounded into a 6-4-3 double play, eliminating him from the basepaths.  I like that kind of detail.

Its a pretty great photo, taken at the the Nagoya Baseball Stadium which was the Dragon`s home until their move to the horrendous Nagoya Dome in 1997.  That same stadium was the location where most of the baseball scenes in the Tom Selleck movie Mr. Baseball were filmed, which did a really good job of capturing the feel of an old style Japanese baseball stadium (I`ve attended games at Koshien, which is similar, and the Nagoya Dome that replaced this one.  The former is amazing, the latter is lifeless).

Five things I like about the photo on this card:

1) The all dirt infield that extends as far as the eye can see;
2) Old school umpire uniform that made them look like they were wearing a business suit;
3) Old school Chunichi uniforms with the dash of red that was removed in the 1980s when they switched to a blue/white color scheme.
4) Big ad for insurance printed on the wall in the background.  Pretty mundane product but the bold lettering provides a cool backdrop
5) Everything has a yellow-greenish tint.  Most of the cards in this set featuring photos taken during night games have that effect. I guess it was the nature of the lighting they used back then.  I like the look a lot better than what you get from the flourescent white lighting in modern Domes.
Posted by Sean at 8:23 PM