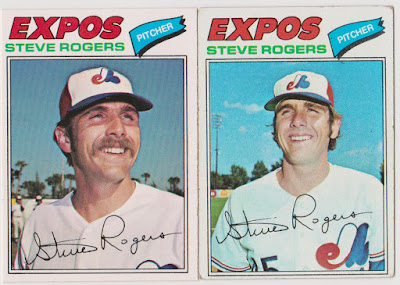 Fellow Japanese baseball card collector Jay and I just completed a trade, I sent him some of my Calbee doubles and he sent me a mixed lot of cards, mostly Expos cards from the 1970s that he was kind enough to hunt down for me (I remain a huge Expos fan despite their no longer existing). Most of them were Topps cards but there were also a few O-Pee-Chee ones.

Among the cards he sent me were the above two 1977 cards of Steve Rogers, one Topps and the other O-Pee-Chee.  O-Pee-Chee cards in the 70s and 80s were released a bit later than the Topps set so they would sometimes catch off-season trades that the Topps sets missed out on.  On occasion this would mean a picture of the player in his new uniform, but more often than not it involved just putting a little "Now with Dodgers" notation on the front of the card.

Anyway, the 1977 Steve Rogers O-Pee-Chee card I discovered was able to capture the most awesome off season change in the player: a new moustache!  The Topps card (on the right) shows him clean shaven as he had appeared in 1976, but the O-Pee-Chee card on the left shows the new look Steve Rogers avec moustache that would appear on all post-1977 O-Pee-Chee cards of him.

It makes me very proud as a Canadian to know that our baseball card sets were on the cutting edge of moustache related developments in the 1970s.  I`m curious if they were ahead of the curve on other well known changes in that field (like Rollie Fingers and his A`s team-mates) from that era.

(Edited to note: I just checked and sadly the O-Pee-Chee cards of Rollie Fingers during his 1972-1973 Moustache transition era use the same photos as the Topps cards).