Casual Day at the Ballpark 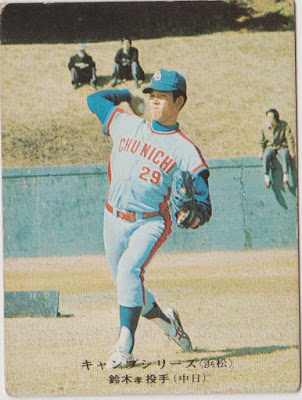 Another interesting card I picked up recently is this one of Dragons pitcher Takamasa Suzuki from the 1974 Calbee set (#596). It is from the Camp Series and the photo was taken in spring training at Hamamatsu that year.

Suzuki, still a rookie at the time, actually had a pretty decent career, lasting until 1989 with the Dragons and winning more than 100 games.  But the real star of this card to my mind is this guy:

Gotta love the way he is just casually dangling those feet over the wall, nonchalantly flaunting that white-socks-on-brown-shoes combination for all to see.  He also seems to be remaining consciously aloof of the other two spectators in attendance that day, who chose to perch themselves a bit further up on the grassy hill beyond left field. 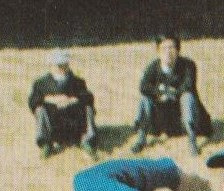 These two seem to be sporting matching black jackets/grey pants combos, not sure if that was just coincidence or they planned it that way so as to distinguish themselves from the other guy.  Either explanation is equally plausible.

It must have been pretty cool to have lived near a spring training facility that had a policy of allowing passersby to literally dangle their feet over the area of play while the players were warming up.  I wonder if they had a staff member who was specifically tasked with going around and telling people to get their feet of the proverbial stage before gametime, or if this was left to the outfielders to take care of when they went out to take their positions.

The 70s in Japanese baseball: what a cool decade.