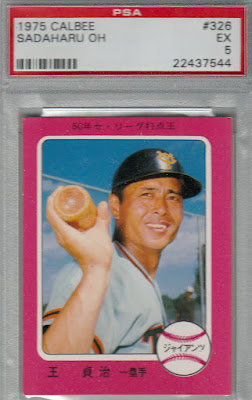 Every once in a while I go on Ebay to see what Calbee cards are listed, mainly just out of curiosity since the prices are usually more than what I can get cards for here in Japan.

Everytime I do, the above card of Sadaharu Oh is usually near the top of the list that Ebay displays and has been for years.  The current asking price is $280 US, which is on sale from its usual price of $350.  The seller has 100% feedback and seems to have been an Ebay seller for a very long time with a lot of satisfied customers.  But there are a few things that kind of bother me about this listing.

For starters, this isn`t a particularly rare card.  The listing prominently notes that it has a PSA population of only 2, but that statistic is meaningless since almost nobody ever gets Japanese cards graded (there are only a handful of Calbees from the 1970s even listed on the PSA registry).  I have a copy of the exact same card in roughly the same condition which I think I paid  about 400 Yen ($4) for a few years ago, which I think is close to the market price.  While the 1975-76 Calbee set is a bit hard to find cards for, the pink bordered series which this Oh card belongs to isn`t one of the short printed ones and can be tracked down without too much difficulty.  Even giving a bit of leeway for the fact that I may have gotten a good deal on mine and that this copy is graded, offered by an Ebay seller who needs to pay fees and had to import it from Japan I don`t see how this gets to be anywhere near a $280 card.

There seems to be an interesting disconnect in baseball card hobby logic that might be at work here.  In the US the most valuable cards from any vintage set from the 1970s are always the big name hall of famers, particularly if it is a rookie card.  In Japan though there is this odd thing which I think actually makes the cards of hall of famers worth less than those of common players (at least sometimes).  Since Calbee in the 1970s was in the habit of stuffing each set with multiple cards of star players like Oh (and Harimoto, Nagashima (manager), Kinugasa, Yamamoto, etc) its actually way easier to get a card of Oh than it is for some journeyman middle infielder who played for a less popular team in the Pacific League, who might have only had one card issued in his entire career.  So demand for that one guy`s card might actually be more than it is for some random Oh card from the same set.  With the exception of short printed cards of common players, I don`t think this same dynamic ever really existed in the US, so taking a fairly common card of Oh and asking a ton of money for it kind of makes sense by US vintage collecting logic, but not by Japanese vintage collecting logic.

Anyway, I`m not accusing the seller of doing anything wrong here, though I do think the card is overpriced.  My point is more just that I think it provides an interesting example of how applying the logic of the American card market (placing importance on PSA population reports and big name stars) produces strange results when applied to Japanese cards.

And one more thing I want to mention about this card: PSA lists it as a 1975 Calbee, but the pink border cards in this set were actually released in 1976.  As I`ve mentioned before, PSA doesn`t seem to know much about Japanese baseball cards.