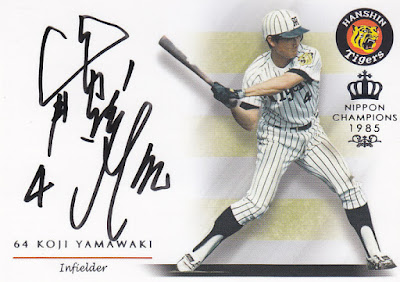 This is kind of a random thing.  Koji Yamawaki was a utility infielder for the Hanshin Tigers in the late 80s-early 90s.  His claim to fame is that he had all of 5 at bats during the 1985 season (getting 2 hits for a .400 average) and thus merited an appearance on this commemorative card honoring the Tigers' championship that year.  He never played a full season, though did appear in about half of the Tigers games in 1990.  He retired after the 1993 season and became a scout for the Tigers, a job he held until Tuesday this week.

On Tuesday he was in Sendai casually riding an escalator behind a 25 year old woman wearing a short skirt.  He then pulled out his phone and started trying to take pictures up said skirt.  The plan apparently worked well until she turned around, saw what he was doing, yelled at him and then a passerby subdued him until police arrived.

"I was simply trying to take a photo from behind her" Yamawaki told police, who were unconvinced and placed him under arrest.

I just read this news and became curious if Yamawaki had any cards, but I wasn't able to find him in any of my Calbee sets.  He had a regular card in the 1991 BBM set, but most of the other cards I could find of him via Google searches were commemorative cards like the above produced well after his retirement (funny how utility infielders appear on so many commemorative cards, I guess its a revenue stream for them).

So if anyone is working on a "guys who have been arrested" themed collection (for whatever reason....) you can add Koji Yamawaki to your want list.