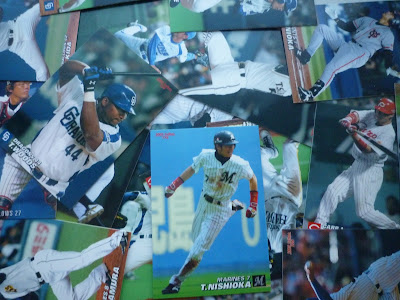 My Japanese baseball card collection is mainly made up of Calbees.  I like Calbee a lot.  BBM is the only other maker I`ve ever tried collecting, but I have pretty much given up on them.  I just can`t bring myself to actually collecting BBM cards. .

I think my preference for Calbee over BBM simply boils down to the fact that Calbee keeps things simple (good) while BBM makes everything ridiculously complicated (bad).  There are a few different ways in which Calbee`s simplicity trumps BBM`s complexity, here are a few off the top of my head:

Calbee cards have almost always followed the simple equation of a full-bleed photo of the player with a minimal amount of information (name and team) inconspicuously printed in the lower corner.  With a few exceptions (the 1975, 1990 and 1995 sets come to mind) they`ve stuck to that formula and it works great. I mean how could anybody beat the pure awesomeness of a card like this 1987 Calbee Warren Cromartie? 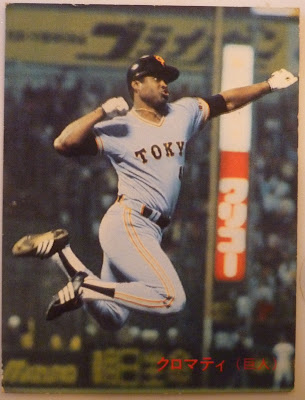 BBM on the other hand has rarely been able to prevent itself from mucking up their card fronts with unnecessary stuff that just distracts from the photo.  Some of the BBM sets aren`t too bad in this regard (like this year`s) but others (like both series of the 2002 regular set) just add some cheap looking graphics to the front that do nothing but detract from the card`s appearance.

And that is just the regular cards, BBM leads the world in producing massively ugly sets covered in foil crap, which leads me to point 2:

2. Production of way too many sets

Calbee in recent years has been pretty consistent in just producing one set a year released in 3 series. There are always a few subsets that go along with the main set, but my only real complaint with these is that they number them seperatly rather than as part of the main set.  Usually one or two of these is a harder to find series of star cards which are almost always distinguishable because they have a bunch of glittery crap on them.  I don`t like those sets but I at least appreciate the fact that they keep it to just one per year.

BBM on the other hand seems to churn out new sets almost everyday.  There are just way more than there can possibly be demand for, with each team getting its own seperately issued set now and a ton of useless and ugly premium sets.  Most of these have atrocious designs like the premium BBM Touch the Game set which just looks awful: 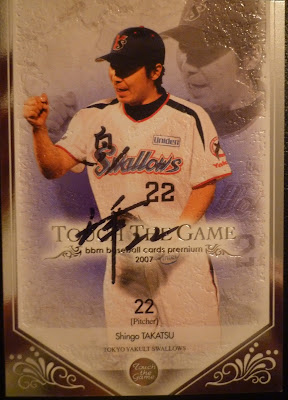 3. Number of cards in the Sets

I guess this is also related to the previous two, but the fact that BBM produces, for a league which only has 12 teams, more regular cards than Topps usually produces for the 30 teams in major league baseball just rubs me the wrong way.  My first abortive attempt to get back into cards actually happened back in 2002 when I tried to put a set of BBM together.  Between the two series I think there were about 800 cards in the regular set alone, which just made me completely lose interest in them.  It is just really obnoxious to put that many cards in a set for a league with so few players.  Calbee sets have varied a lot in size over the years but recently they`ve been in the 300 or so range with about 100-200 more in the subsets, which is way more reasonable.

This is an admittedly odd reason, but I like the fact that Calbee cards are basically just promotional items intended to boost chip sales. It is just so....innocent.  It harkens back to a day when cards in North America were basically the same - things to encourage people to buy tobacco or gum.

This also makes them popular items among one demographic which BBM seems to ignore: kids.  One of the things that makes collecting a set of Calbee cards in near mint condition so difficult is the fact that so many of them, even today, are collected by kids who put them in their pockets, throw them around and do general kid-like things with them.  While I don`t like getting dinged up cards in the lots I buy, I do really like that fact.

In that sense, Calbee cards have way more in common with American cards from the 60s than today.  They are something that kids buy at the corner store in the summer and play with. And at 90 yen or so per bag they are something kids can easily afford.

BBM cards on the other hand are very clearly marketed at an adult market.  They are sold in packs at high prices and they don`t come with anything else.  Any time you by a lot of BBM cards on Yahoo Auctions they will be in pack-fresh mint condition.  While I like getting cards in nice condition, I also find this fact a bit depressing.  It means no kid has ever played with or loved these cards like they do with the Calbee ones.  They were bought by an adult collector (like me, sigh) and are basically just meant to sit in a box existing in mint condition for the rest of time.  Its just not a very uplifting thought.  Where Calbee cards bring to mind classic American cards like the 1957 Topps set, BBM evokes the dreggs of the 90s like 1992 Donruss or 1995 Score.

Anyway, those are just a few reasons I way prefer Calbee over BBM.  I do have some BBM cards kicking around, but those are basically just ones I bought out of curiousity because they were cheap and not because I wanted to collect them specifically. The ramblings of a thirty something who misses the old days....