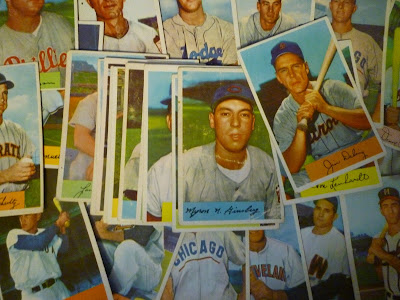 I have a pretty decent sized collection of vintage (pre-1980) American baseball cards in addition to my Japanese ones.   Most of these I`ve accumulated off of Ebay over the past year or so since my interest in collecting cards was rekindled.

With vintage cards I tend to eschew higher grade cards.  My policy is to go for cards that fall into the VG-Ex range for cards prior to about 1973.  Partly this is because, especially for earlier stuff, vintage cards in Nrmt condition are just way out of my price range.

There is, however, a much more pragmatic reason for collecting old cards in VG-Ex condition, which I think can be summed up in this photograph: 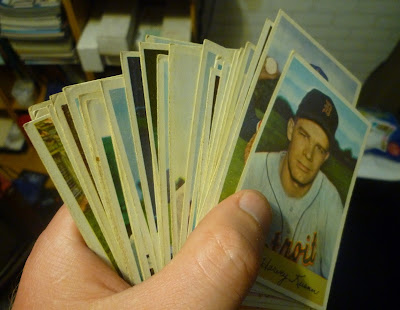 Yup, that is a pile of 1954 Bowman cards in VG-Ex condition.  Note what I am doing with them.  Yes, I am actually holding them in my bare hands without any sort of plastic between my fingertips and the card surfaces whatsoever! 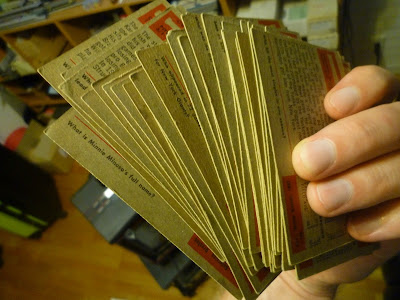 I haven`t looked at a Beckett`s in a while but I`m guessing the high value of this pile of 54 Bowman commons and minor stars would be about $300 or $400 in Nrmt condition.  If these were in Nrmt I would not be able to do any of those things with them.  I would just be too afraid to even touch them.  They would all be in rigid plastic holders, which are no fun to flip through at all.

VG-Ex is exactly the perfect grade if, like me, you like to handle old cards au naturel.  The corners are already a bit rounded so you don`t have to worry that any slight bump is going to cut their value in half, which is something I constatly do when I have valuable Nrmt condition cards in my hand. It is a very annoying feeling to have.  At the same time though they aren`t destroyed like cards in fair or poor (or even good)  condition are.  VG-Ex cards are generally pretty attractive to look at, without any major creases or other serious damage.

Post-1973 (ish) it makes less sense to collect VG-Ex cards simply because there are so many higher grade cards still preserved that there isn`t much point.  But for earlier cards, why bother with all that plastic?  I keep these cards in a simple cardboard box, the way they were meant to be kept!
Posted by Sean at 4:30 AM

Email ThisBlogThis!Share to TwitterShare to FacebookShare to Pinterest
Labels: 1954 Bowman