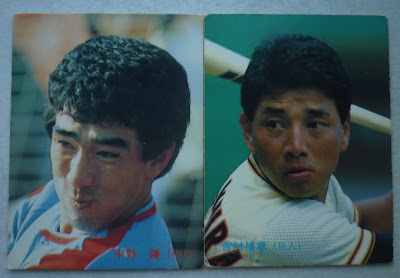 While this makes for some awful-looking cards (1961 Topps Willie Mays, that is directed at you) in Calbee`s case it had the benefit of creating, time-capsule-like, an excellent repository of 1980s hairstyles that were popular during Japan`s bubble era.

So I`ll be doing a series of posts on here comparing some of the better ones, contest like.  Today`s contenders are Ken Hirano of the Dragons (left) and Sadaaki Yoshimura of Kyoujin (right).  Both of these cards are from the 1987 Calbee set, which has some great 80s hair.

I think I have to give a hands down victory to Hirano on this one.  Yoshimura`s is a decent effort, daringly teased for effect, but Hirano`s is superb.  It literally looks like he went into a novelty store like the Loft, bought one of those sculpted plastic fake-hair pieces that they make for halloween costumes (usually samurai style) with an unusually specific name like `middle infielder, Central League, 1986` and just decided that was going to be his look.
Posted by Sean at 2:29 AM