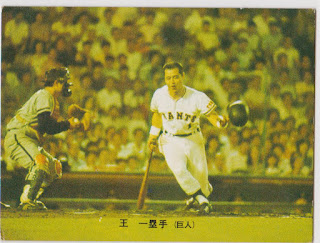 In my previous post I complained a bit about how monotonous Calbee's photography is these days.  I've been going through my old cards from the 70s when Calbee photography was anything but, and thought I would do a few posts highlighting some of the gems.

1) it shows him on the "agony of defeat" side of things for a change, his flamingo swing having twisted him around so bad after missing the ball that his helmet went flying.

2) horizontal cards are a nice variation on the vertical every now and then!

3) They cropped the photo so as to keep the catcher, ball that Oh missed clearly visible in his hand, in the shot. Not too sure but I think it must be Koichi Tabuchi, who appears on a huge number of cards of other players from the 1970s since he was the Tigers catcher and they took a lot of shots during Tigers games.

4) The packed stands of faces in decent focus watching Oh twist is a nice backdrop.

5) The yellowed color of everything in the photo makes it feel very 1973 to me for some reason.

6) Unlike most Calbee cards from the 1970s this one actually is close to a "regular" card of Oh rather than from some topical subset - the back features a lot of biographical information and no text.  Oddly it doesn't include any statistics, but it does tell you that he weighs 79 kg.

This photo would almost certainly never have appeared in the 2018 set and not just because it was taken 45 years ago, but because it was chosen by someone with a bit of imagination, which is no longer allowed in baseball card photo selection in Japan (judging by recent standards, alluded to in the previous post).
Posted by Sean at 12:52 AM