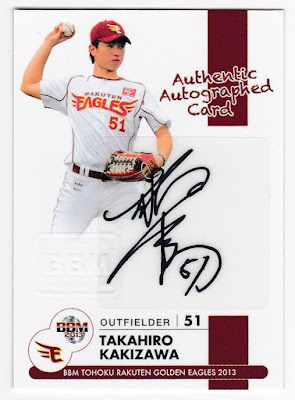 I've decided to take my earlier post on recent upskirt voyeur Koji Yamawaki a kind of series - featuring cards of players who have recently been caught committing crimes.

This week's entry is (now former) Giants 2 gun outfielder Takahiro Kakizawa, who was released over the weekend after it was discovered that he had committed 110 acts of theft against his fellow Giants team mates.

It seems Kakizawa had started a side gig which involved stealing gloves, bats and other things from Giants players and selling them to a couple of stores in Tokyo, netting about a million Yen.

The scam was busted up when Giants players started noticing their stuff appearing for sale on line, and someone had a look at the security camera footage and found Kakizawa hauling said stuff out of the locker room.

Kakizawa was drafted by the Eagles and traded to the Giants in 2016, though it should be noted he has never played (and now never will play) a game at the Ichi gun level.  Apparently he needed the money to pay off some debts, which I guess would explain the extraordinary stupidity of ruining a career for, relative to the potential earnings from even just playing part  of a single season at the Ichi Gun level, a crime with such a low payoff.

I don't own the card at the top of this post, put out by BBM in 2013 (the image is from an online auction) and I don't think Kakizawa has many.  I should also mention that his cards may not fall perfectly into the crime committing subset genre depending on how you define it.  Theft is definitely a crime, but the article doesn't actually say he was arrested, merely that he was fired after the Giants own investigation.  Whether he faces criminal charges is a separate issue that doesn't seem to have been decided yet!  Given the pathetic nature of the crime and the fact that his career is over at such a young age I would be inclined to say he has already been adequately punished.