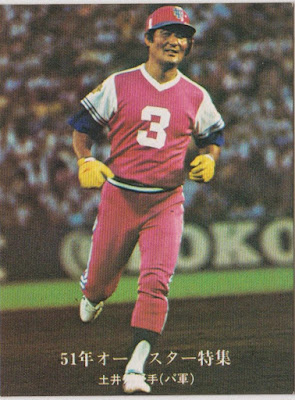 One of the things I find particularly interesting about Calbee sets from the 1970s are cards of the Lions.  The Lions today play in Saitama and are owned by Seibu, but back then they played in Fukuoka and had several owners (Nishitetsu, Taiheiyo and Crown Lighter).

What interests me most about them though is that they went through an experimental period in which their uniforms were designed backwards - with the front of the jersey looking like the back and vice versa.  One of the cards that best presents this unique style is #911 from the 1975-76 set.  Its from the 1976 All Star game series and features Lions outfielder Masahiro Doi rounding the bases.

The front of his jersey has that big 3 in the middle and looks exactly like the backs of most conventional jerseys (and the backs of Lions jerseys feature the team name or sometimes "Fukuoka" like the fronts of most look like).  At the time the Lions were officially the Taiheiyo Club Lions.

I`m not sure why the Lions experimented with this interesting design - it didn`t catch on (no other contemporary team had their jerseys like that) and the Lions abandoned it not long after this card was made. The Lions weren`t a particularly popular team in the 1970s and this may have been an attempt to spur some interest in the team by giving them a radically different look from others.  Sadly it didn`t work and the team relocated from Fukuoka to Saitama in 1979.  A friend of mine who was a kid in Fukuoka in the 1970s has regaled me with stories of how devastated he was when they moved. Being a Montreal Expos fan I was able to relate.

Another appealing point is that in addition to the backwards look, the pink color of the uniforms also really stands out - not many baseball teams have gone that route and it makes Lions cards really noticeable when you are flipping through a stack of 1970s Calbee cards.