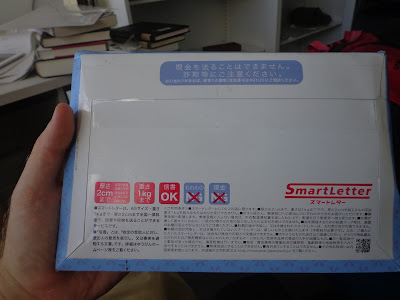 For the past couple of years I have minimized my purchases of bags of Calbee chip bags to just a few per series.  This is partly because of a desire to avoid eating potato chips (screw you, salt) and also because of the impracticality of putting together Calbee sets one bag at a time.  I tried that once in 2011 and ended up with less than half a set and so many bags of chips that I didn`t know what to do with them (and it cost quite a bit too).

So these days I try to put my sets together via the purchase of large lots of singles off of Yahoo Auctions, which seem to be getting easier to find (at least for recent stuff).  I like it because getting one of the lots in the mail in a Japan Post Smart Letter Pack is sort of like getting a huge wax pack to open. I picked up one 72 card lot of 2016 Series 1 cards which arrived in the mail yesterday and just cracked it open: 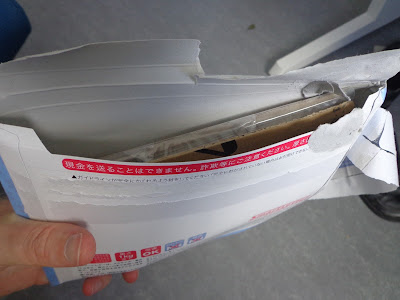 The seller used part of the cardboard box that the bags originally came in as packing material, which is kind of a neat touch (actually the box is from series 2, so maybe the same seller will have some of those soon....): 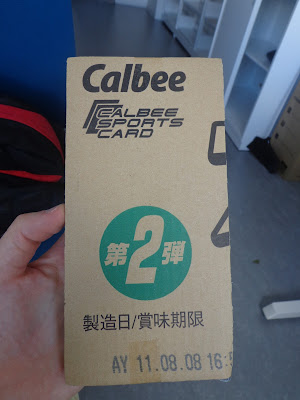 And the cards are all nicely stored, the seller even inserted them individually into their own flimsies (not necessary but still a nice touch): 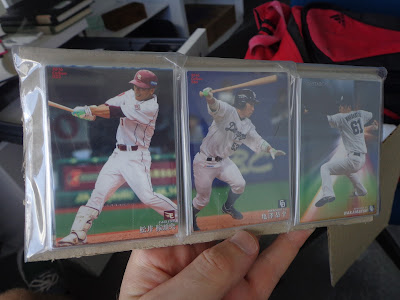 Voila.  72 different cards including some from the base set, Title Holders subset and Star Cards subset.  Best of all: no doubles! 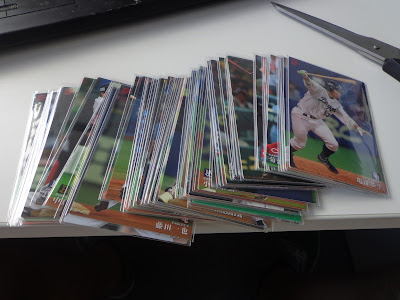 With current Calbee cards I like those featuring Hiroshima, Hanshin, Yakult, Rakuten, Lotte and Yokohama the best.  Photos of the players are almost all (in fact, maybe all) taken at their home stadiums (kudos) and those are the teams that don`t play in domes, so the photos don`t have that ugly flourescent sheen/fake grass backdrop like ones of Dragons, Giants, Hawks and other Dome teams do. 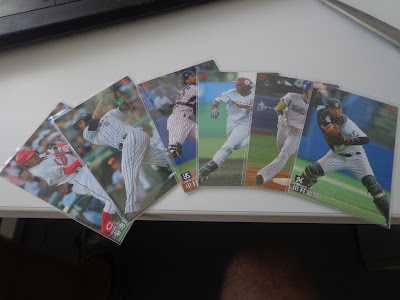 I have to admit to still not understanding how the business models of sellers who put these lots up on Yahoo Auctions works.  I paid only 300 Yen for the lot (not including shipping), which works out to less than 5 Yen per card.  Purchased retail at 98 Yen per bag with 2 cards would work out to more than 10 times that much.

Obviously if you buy bags wholesale in quantity you would pay a lot less, but it would still work out to way more than 5 Yen per card.  The seller seems to make it up by selling the insert and parrallel cards (gold signature  and Wins Leaders) at a premium, but even those don`t seem to sell for too high (250-600 Yen each on the same seller`s listings).  Given the amount of work that would go into it I can`t imagine it being a particularly profitable venture, but I do thank them for making these things available to me!  I am not quite close to finishing the Series 1 base set this year.