1991 Calbee: What is up with the lousy photography? 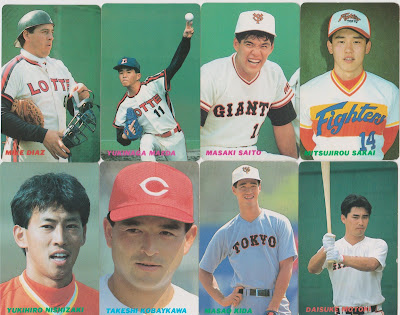 I just picked up a small lot of 1991 Calbee cards off of Yahoo Auctions.  The set is mainly known for the Hideo Nomo rookie cards in it, which this lot did not contain (though I already have 3 out of 4 of them).

I bought this lot mainly because it was too cheap to pass up and not because I particularly wanted it. To be honest the 1991 Calbee set is probably the only set that Calbee has ever produced which I dislike to the point that I actually prefer the BBM set from the same year.

The main problem is the photography.  As I have stated in a lot of posts here, one of the main attractions of Calbee cards is the wonderful in-game photography that they capture.  That is particularly evident in the amazing sets of the 1970s with the slightly bigger card sizes that really complimented the images.  The mini card era of the 1980s also contained a lot of really high quality photography (the 1988 TV screen grab card fiasco aside).

In 1991 though something at Calbee went wrong - the photography in this set absolutely sucks.  Look at the above cards (half of the cards in the lot I bought) - its dreadful. Uninspired close-ups, sometimes of players without their hats on and usually against the backdrop of a green wall. Ugh.  Most of the photos in the set seem to have been taken during warm-up sessions at spring training facilities rather than in-game at regular ballparks. While some other sets had the occasional boring photos, these were generally the exceptions rather than the rule.  In 1991 Calbee flipped that on its head - there are almost no exciting action photos anywhere to be found.

The odd thing is that 1991 seems to be the only year where Calbee photography was this bad.  The 1990 set has tons of action photos taken during games.  Same with the 1992 set.

1991 was a kind of transitional year for Calbee, having just moved to the bigger card format in 1990 and facing competition from BBM, but in some ways that makes the poor photography even harder to understand (competition usually encouraging you to step up your game rather than the opposite).  I wonder what happened.  Maybe they moved the release schedule up and had to get the photos really fast, sacrificing quality for speed?  Maybe they cut the budget for photographers in a cost saving move?  I`m not sure what the explanation is but the result is basically the most unattractive set Calbee has ever produced.  Since I`m a Calbee collector I will begrudgingly buy these things when they come along cheap, but I`m nowhere near as enthusiastic about it as I am for their other sets.

Email ThisBlogThis!Share to TwitterShare to FacebookShare to Pinterest
Labels: 1991 Calbee