How Did You Get Here? American Cards in Japanese Markets. 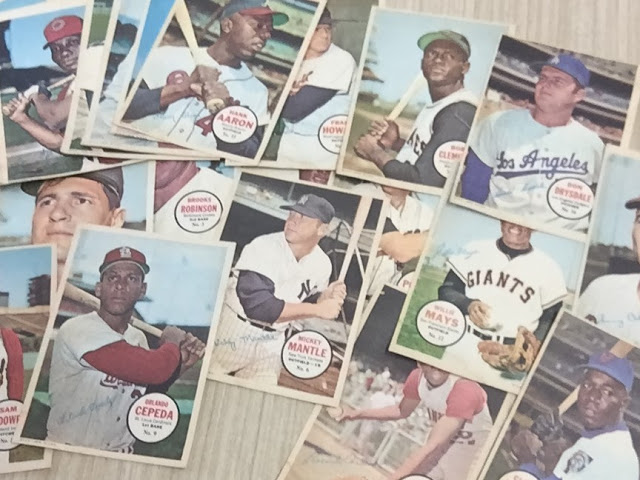 I don't post much about my collection of MLB cards on here (though I do have one).  I made an editorial decision a few years back to just stick to talking about Japanese cards.  But I'm going to make an exception with these.

Every once in a while I'll stumble across something on Yahoo Auctions and wonder to myself "How on Earth did you end up here?"  This was one of those things.  It is a complete set of 1967 Topps pin ups.  These were distributed in regular wax packs in 1967 and feature a boat load of big name Hall of Famers - Mantle, Clemente, Aaron, Mays, and so on.

Its really rare to find vintage American cards over here.  There is a significant segment of the Japanese hobby that is devoted to collecting American cards, but they are overwhelmingly only interested in modern cards.  Basically its just since Nomo and Ichiro went over to the US that Japanese collectors became aware of American cards, and they don't have much interest in stuff that came out before those guys went over.  There is a very niche market specifically for cards of American players who came to Japan so there are a few dealers that will stock pre 1990s US cards of  guys like Warren Cromartie or Willie Davis.  And occasionally a PSA graded card of some star from the 60s might pop up.  But its rare.  Nobody sells singles or lots from older sets.  And nobody sells complete sets.

So I was really surprised to find this complete set from 1967 up for sale.  The guy selling it had no idea what it was.  The title just said "1960s Major league Bromides?  Cards?  32 of them."  The description further made clear that the guy had no idea what they were, stating (incorrectly) that he had heard they were given out with candy in the US back in the 60s.  No mention of Topps, or of the names of any of the players.

This wasn't surprising since the guy selling them isn't a card dealer.  About 80% of his listings are women's clothing (mainly kimonos), with a smattering of toys and used electronics.  No cards.  He just found these in a box that he had acquired and threw them up.

This turned out to be good for me, since he started them at 3,000 Yen and I ended up winning them for just 3,100 Yen (about $25 US) after outbidding the first bidder, who immediately lost interest and didn't contest me for them.  These aren't super valuable, but that is still way less than what they go for in the US.

I do wonder how these things in their 53 years of existence managed to cross the Pacific Ocean and wind up in a box in the hands of a kimono dealer  in Hiroshima who had no idea what they were.  Obviously at some point somebody put the set together.  Was it an American serviceman back in the 60s who was stationed here?  Or a Japanese person who lived in the US, collected them, and brought them back home?  Or someone more recent, an American English teacher who collected cards?  A Japanese collector who bought them off Ebay but then lost interest?

There are a lot of ways these might have found their way here, but now they are in my hands and will likely stay there for quite some time!