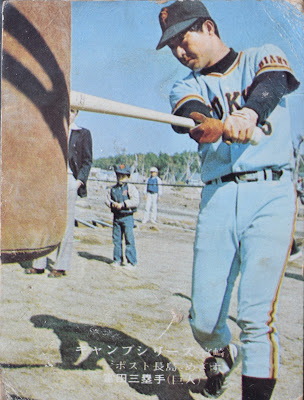 The above card is #612 from the 1974-75 Calbee set, in the "Camp Series" subset, which features photos taken from the Giants training camp in Miyazaki.

I like this card because there is a lot going on in that photograph, so much so that it kind of looks like the work of a Renassaince artist.  1970s Calbee cards are the best for stuff like this.  It features the late Giants third baseman Masaru Tomita hitting a punching bag with his bat.  I never played competitive baseball past my high school days so I'm not an expert, but is this an actual training thing?  I've never seen players taking whacks at a punching bag during batting practice, and it seems like kind of a dangerous thing to even try (wouldn't you risk breaking your wrist the second the bat came to a sudden stop when hitting the bag?) so I'm a bit confused about the purpose of it.

Also odd is that if you look closely you'll notice that Tomita is not standing on level ground while he does this, he is on a sloped hillside.  Again, I never played ball professionally but why is he not on a level playing surface?  Surely the Giants must have a bit of flat land in Miyazaki where they train? 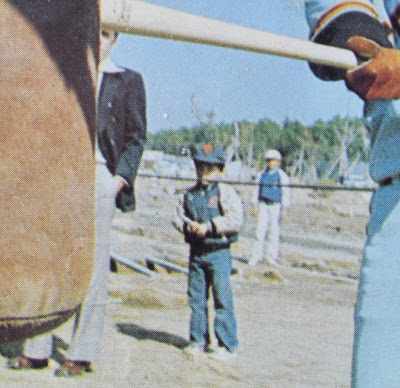 What I like best though is that kid standing there watching.  He looks like he's about 5 or 6 years old and is decked out in a Giants hat and jacket.  His posture, with his hands clasped together in front of him, suggests he is extremely nervous.  Maybe he is worried that Tomita is going to hurt himself with the punching bag thing.  Or maybe he is just shy, my own son is about the same age and looks like that sometimes when he is introduced to grown ups he doesn't know.  Its the sort of detail that adds to that Renassaince artwork feel: the image of that kid perfectly encapsulates the experience of being a little kid in the presence of a heroic grown up figure like a pro ball player. Also note that the kid is perfectly framed, he is almost dead centre in the photo and the bag, the bat and Tomita form a frame around him, drawing the viewers attention to him.

Also the grown up male standing a couple of paces ahead of the kid, partially obscured by the punching bag, is brilliant.  He's probably the kid's father and looks much more confident, his hands in his pockets as he casually watches Tomita in action.  I love the fact that the picture gives you exactly enough of a view of him to get a sense of who he is without showing you all of him.  His left arm is all you need to see to tell how confident and relaxed he is in contrast to his son. You just see one of his eyes and he looks kind of tired.  At the same time, his positioning suggests indifference to his son, giving the photo a kind of melancholic subtext.  He isn't crouching down next to his son and sharing the experience.  He looks like he's completely forgotten that his kid even exists. If anything, taking his kid here might be a chore to him rather than a joy, which might give us new insights on the source of the child's nervousness and make him an even more appealing and sympathetic figure to us.

This is sort of reinforced by the huge 70s collar the guy has, which gives him a vaguely used car salesman aura.

Then there is the other kid, in the blue and white jacket standing further in the background. He looks like he feels somehow left out.

The back of the card doesn't mention the kids, the dad, the punching bag or the non-level playing surface.  Rather it talks about who was going to play 3rd base for Nagashima's Giants that year, noting that Tomita was in the lead for the role.  Unfortunately for Tomita, things didn't work out quite so well as the card back suggests, he only played part time for the Giants that year before being traded to the Nippon Ham Fighters as part of the deal that brought Isao Harimoto to the Giants in 1976.  He did however get an All Star nod while with the Fighters before retiring in 1980.  He passed away in 2015.

Anybody else have any examples of cards with photos that look like the work of Renaissance artists?
Posted by Sean at 7:15 PM