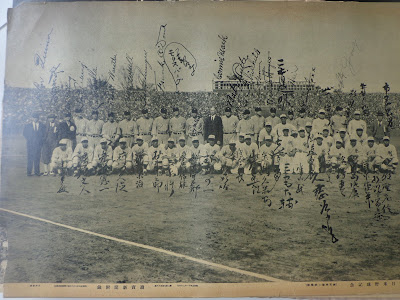 Recently I have been getting into the vintage stuff a lot and last week I picked up a really cool centerpiece for my pre-war collection.  It is a 1934 newspaper bonus insert featuring a picture of the members of the American and Japanese teams that played in the American League all star tour of Japan that year.

It is so awesome.

Its a pretty good sized picture, about the size of a B4 sheet of paper, and printed on cardstock.  According to the text along the bottom edge it was taken at Jingu Stadium on November 25, 1934.  It was distributed by the Yomiuri Shinbun, the paper that organized the tour and shortly shortly thereafter would form the first NPB team, the Giants. 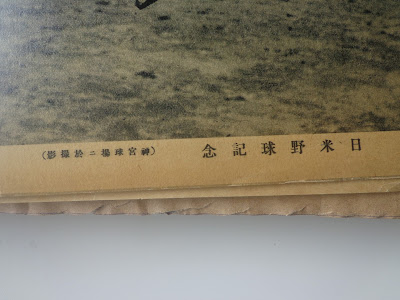 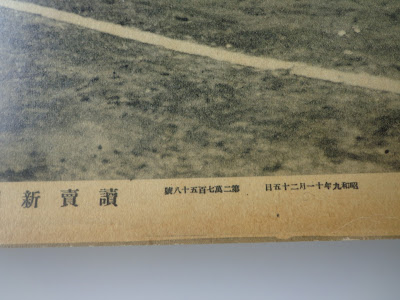 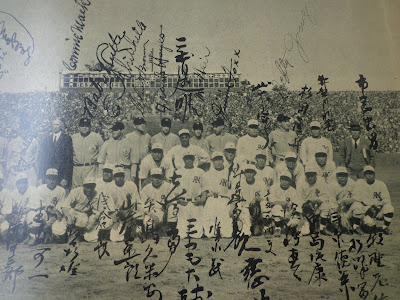 The photo features facsimile autographs of each player.  Interestingly there is currently an auction for the same photo up on Yahoo Auctions here which rather dishonestly suggests that the autographs are real, but they are clearly not.  Bidding on that one is up over 54,000 Yen as I write this (about $500 US) with 4 days remaining, whoever wins it will likely be disappointed when they actually have it in their hands. As I have mentioned before, Yahoo Auctions Japan is a bit of a haven for rip off artists selling fake autographs, though at least in this case the photo itself appears to be genuine.  Its an amazing piece and definitely worth something, but nowhere near as much as a photo actually signed by all those guys (one copy, which formed the basis for this photo, must exist somewhere out there assuming it wasn`t burned in the war....wow, what a find that would be).

Anyway, back to the photo.  Moe Berg`s signature stands out among the Americans since he signed his in English and Japanese katakana, which is kind of neat.  Despite being a relatively minor player, his exploits on the tour are best known since he engaged in some spying for the US government while there, taking some photos that would be useful during the War a few years later. 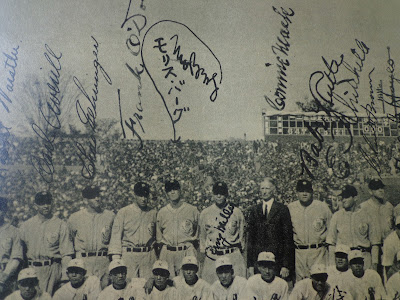 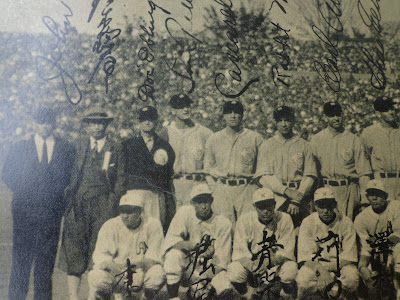 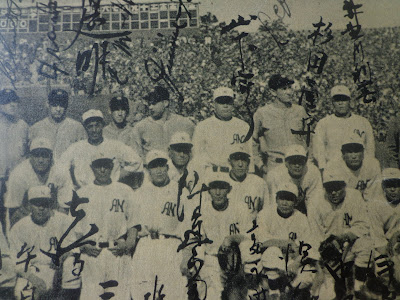 At some point I`ll try to make a list of the Japanese players.  Unfortunately their signatures are pretty difficult to read so I am having trouble identifying the individuals based on that alone.

I should add that this doesn`t seem to have been a stand-alone insert.  I actually bought it as part of a 3 piece collection of Yomiuri Shinbun inserts. One of these features the cabinet of then Prime Minister of Japan Keisuke Okada.  Okada is a really interesting figure in pre-war Japan and his inclusion in a set with the American all stars is kind of fitting.  He was staunchly opposed to any war with the United States and the rising militarism of Japan at the time.  He was the subject of numerous assassination attempts as a result, one of which killed his brother in law and led to his resigning from office in 1936.  He retained this position even after the war began and was part of the faction that wanted to negotiate peace with the US.

The other photo is a bit less fitting, featuring military leaders some of whom probably led the fight against the Americans during the war! 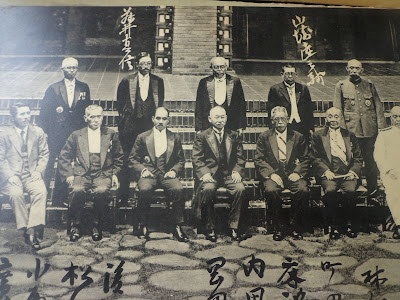 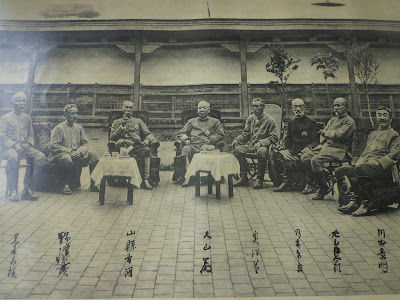 I`m probably going to have the baseball photo framed at some point, its size makes it perfect for a display piece.