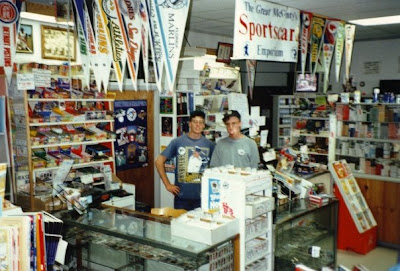 The above picture was taken exactly twenty years ago this month: June of 1993.  It is a small piece of baseball card history: a picture of a bubble-era baseball card shop that was about to permanently close its doors.

That is me on the right, the guy in the grey shirt and Yankees hat. I look like I`m wearing a scowl on my face, but actually my mouth was stuffed full of bubble gum so I  look a bit wierd in the photo.   I was 16 years old and that is my best friend from high school Mike standing next to me.  We both worked at the store and were about to lose the best jobs any high school student has ever had.

The store in question opened in April of 1991 in the back corner of a video rental store in a suburban strip mall in the picturesque city of Kingston, Ontario.  I was the very first person ever hired by this store for the simple reason that the guy who opened it happened to be my dad (such nepotism was rife in the  baseball card store industry in the early 90s).

I had started collecting cards around 1986 or 1987 and got him into it shortly thereafter.  By 1989 or so we had a ton of doubles lying around the house and started selling them at neighborhood garage sales.  That eventually led to setting up tables at card shows and within a couple of years we had an actual store.  I`m glossing over a lot of the details in that story here, but I`m guessing that most of the thousands of card shops that opened during the bubble era probably followed a similar path of development.

During the two years and a bit that the store was open, much hilarity ensued as two teenagers with no supervision and job security ensured by family ties basically ran amuck in the place.  Good times.  Perhaps I will enthrall you with such tales in future posts should this blog last long enough.

The store`s closure wasn`t, like most cardshops in the 90s, caused by the decline of the industry, which really didn`t hit in full force until the baseball strike a year later.  Rather it came about simply because my dad, who was in the army, got transferred and we had to leave town in the summer of 93. So in the above photo me and Mike posed for a last-day-of-the-store photo taken by my dad.

We never re-established the card shop after the move and I basically gave up on collecting cards that year.  They got packed up and put into storage.  I went off to university a couple years later and - long story short - am now married and living in Japan.

In the past couple of years I`ve rekindled my old interest in baseball cards and it has gotten to the point where I`ve decided it was blog-worthy, hence my decision to create this blog.  Naturally living in Japan I collect Japanese baseball cards, but I also make the odd order from one of the few Ebay sellers who ship baseball cards to Japan in order satisfy my longing for the MLB stars of old.

Thus begins the blog.  We shall see how far I get with it.
Posted by Sean at 3:35 AM