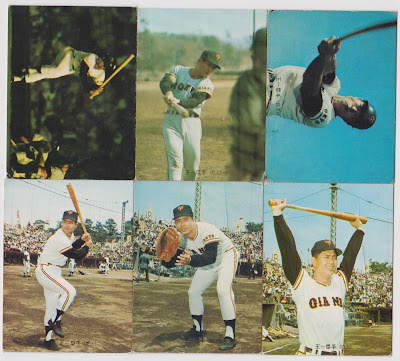 The 1973 Calbee set is pretty awesome.  I don't think I can ever collect it due to the cost, but I did just make a major purchase - the full Sadaharu Oh run from the set.

The set famously begins with card #1 of smiley face Shigeo Nagashima, and in fact the first 6 cards of the set all feature Nagashima.  This is followed by the next 6 cards (7 to 12) which all feature Sadaharu Oh, which I just purchased en masse via Yahoo Auctions.  I've always preferred Oh to Nagashima so its sort of natural that I would get his cards first, but Nagashima's are also on my want list.

The cards are all pretty epic, but card #7 in particular is quite striking, with Oh taking a swing against an all blue sky backdrop (upper right card in the above photo).  The card is (on the back) titled "Monster"and notes that he is often called 怪物 (monster) as a player. The photo is strikingly similar to the one on Nagashima's first card, also against an all blue backdrop, and this is probably not a coincidence.

Card #10 (lower right in the above photo) is the only one that I already have, though this new copy is a bump up in terms of grade. Its interesting to note that card #11 (next to it in the photo) was taken at the exact same time, which is evidenced by the same fans sitting in the same locations in the stands in the background.  The photographer must have just caught him, gave him a bat and said "Pose with this", then tossed him a glove and said "OK, now this." Card #12 (lower left corner) looks like it was also taken at the same time, but since its at a different angle the stands in the background are different.

Anyway, I'm pretty happy to have these in my collection now!

Also, this is my first post in about 5 months.  Work has been busy, but this absence is mostly explained by the fact that my wife and I are expecting a second child (girl this time!) and so my life has gotten much busier.  I might not be posting to this blog (or collecting baseball cards) as much as I used to for a while but will try to clock in whenever I have something interesting to write about and the time to do it!