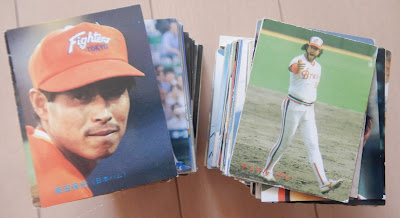 I have been so obsessed over the past couple of years with trying to finish my 1987 Calbee set (92% of the way there!!) that it kind of escaped my attention that I am also closing in on that set's predecessor: 1986 Calbee.  So I thought I would do a little post on how that project is going since I have started to really get earnest about knocking this one off the wantlist and I might even complete it before I finish the 87s.

Design wise the set is basically the same as all the others from the 80s and not much need be said about that.  The set is sort of notable for having one of the earliest hot rookie cards in the Japanese hobby, featuring the rookie card of Kazuhiro Kiyohara.  Sports Card Magazine identifies card 81 in the set as his official rookie, but he actually has several regular cards in the set, this one is #97: 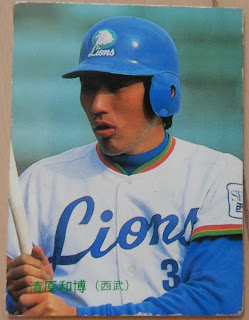 There is a really interesting parallel between the Kiyohara rookie and the other hot rookie card of 1986, Jose Canseco.  I remember when Canseco's 86 Donruss reached a high water mark of 100$ in Beckett and was probably the most popular card in the hobby around 1990 or so.  Kiyohara's rookie card reached a similar peak (8000 Yen).

Canseco of course had his career sidelined by injury and his well known use of performance enhancing drugs.  Despite putting up impressive career numbers (462 home runs, 1 ball bounced off of head to give opposing team home run) these kept him out of the hall of fame and he is basically an outcast in the baseball world today, a perennial weirdo who is probably just as well known for not being able to beat Danny Bonaduce in a celebrity boxing match as he is for being baseball's first 40/40 man.

Kiyohara is something close to a Japanese equivalent of Canseco.  Like Canseco Kiyohara was a power hitting superstar in the late 80s - 90s who had a mix of injuries and drug problems sideline him in the latter half of his career.  And despite finishing with even more impressive numbers than Canseco - being a member of both the 500 home run and 2000 hit clubs - he hasn't been inducted into the Japanese baseball hall of fame and may never be.  In 2016 he made headlines by being arrested and convicted of drug possession.  Since that he has basically been shunned by the baseball world, even having his high school bat removed from an exhibit covering the history of the Koshien tournament.

So the 1986 Calbee Kiyohara rookie is about as prized today as a 1986 Donruss Canseco - kind of a neat throwback card but not one anybody pays serious money for anymore.  Which is a big win for those of us putting this set together on a budget!!!

As with any set from the mid-late 80s, my favorite cards are always those of Randy Bass in one of those awesome 80s Tigers batting helmets!!! 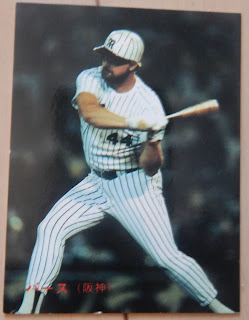 My set is actually quite well along, I have 180 out of the 250 cards, which leaves me just 70 to go.  I added a few of those last week and am scouring Yahoo Auctions to get some more to scratch off my checklist!