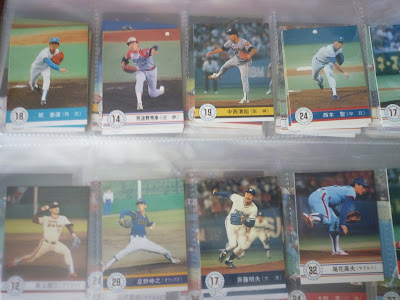 As I mentioned in my previous post, I thought I would try to do some updates on collecting goals I reached in 2015.  Probably the biggest is that I finally completed one of the 1980s mini-sized Calbee sets.  Sort of.

The first series of the 1990 Calbee set is kind of an oddball one since it is the last series of Calbee cards to have that mini size, but it isn`t technically a set, since there were more seriest produced that year which were of a completely different design and size (basically identical to the 1991 Calbee set).  I don`t have the full 1990 set including those upper series cards, but I did complete the first series of 55 cards, which are the last Calbees in the mini size era.  I am going to refer to it as a set from here on however just to keep it simple.

Owing to only containing 55 cards, the 1990 1st series is definitely the easiest of the mini card Calbee sets to put together, so it sort of represents the lowest hanging fruit for mini card era collectors.

I`m quite pleased with it. Though there aren`t many in the set they are still a bit hard to find, Yahoo Auctions only has a few singles listed most of the time.  Its got some notable cards, like Warren Cromartie`s last card from his NPB playing days (though not his last card period, since he returned to play for the KC Royals after leaving Japan and had some MLB cards in the 1991 and 1992 sets if my memory is correct). 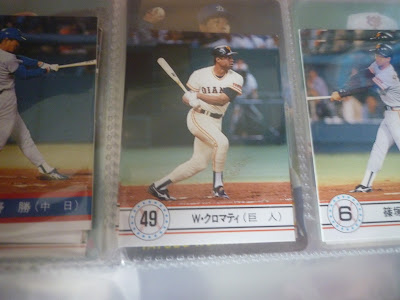 It also had one card of one player who was still active as of last season (though he has now retired), Dragon`s catcher/manager Motonobu Tanishige; 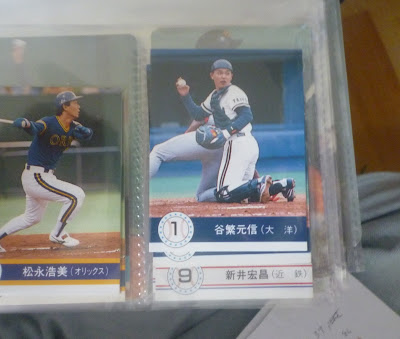 There is a certain sense of satisfaction one gets from completing a vintage set, even a small one like this.  My 1987 Calbees are probably next on the radar for completion in 2016, I am about 80% of the way to finishing that one (but at almost 400 cards that is still more of a challenge than these ones were)!