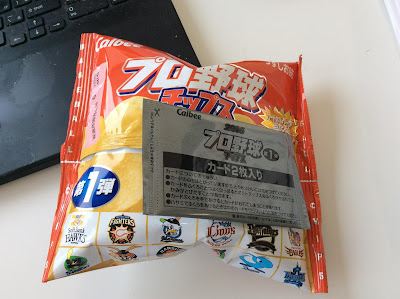 I was at the convenience store this morning and much to my surprise saw that they had a pile of bags of Calbee chips on sale.  They seem to have released them much earlier than normal this year, usually I don't see them until the first week of April. So naturally I bought a bag even though I wasn't specifically in the store to buy chips.

From my first bag I can tell you that there are some significant changes this year.  Well, "significant" is a relative term, for a set that has hardly changed at all in about 18 years almost any change counts as significant.

First, the bags look different than they have in past years.  The elements of the design are similar, but they are horizontally rather than vertically oriented as they have been ever since I started collecting Calbees.  Also, the card is attached to the front of the bag rather than the back, something that I have also never seen before.

The most significant change though is on the front of the cards.  Last year I wrote a post on here lamenting the demise of the use of kanji on the front of Japanese baseball cards.

While I sincerely doubt that anybody at Calbee reads an English language blog that averages about 15 page views a day, they nonetheless seem to have somehow received my message because this year the player's names on the regular cards are written exclusively in kanji and they are fantastic!! 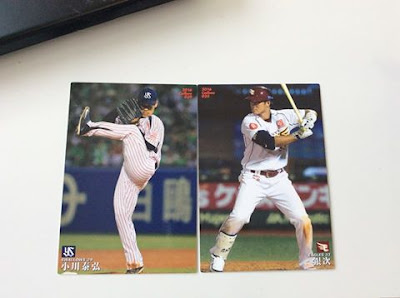 This is actually a really radical departure for the set, other than the company name "Calbee" and the team logo there is no English text anywhere on the cards, including the backs.  This is the first time since 1989 that Calbee cards haven't at least had the player's name written in English somewhere on the card to make them more accessible to foreign collectors and I wonder if this represents Calbee's abandonment of its attempts to woo those collectors.

I personally welcome the change.  As I wrote in my post last year, having the player names written in kanji really distinguishes these cards as a "Japanese" baseball card set rather than a more generic set geared towards an international market.  While it does make collecting them a bit more of a challenge, that very challenge in my opinion is what makes collecting them interesting in the first place.

So anyway, this has me really excited about collecting this year's set.  As the above photo indicates I now have the cards of Yasuhiro Ogawa and Ginji.  I'll have to look up the checklist to figure out how many more I have to go.....