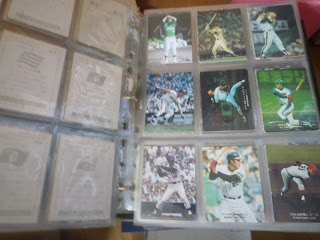 I didn`t post too often here during 2015 (having a baby will cut down on your blogging) but I actually did add quite a few goodies to my collection last year so I thought I`d try to do a few posts this month to share some of the highlights.

Mainly I focused on older Calbee cards (1991 and earlier) this past year.  One set which I have particularly fallen in love with, and is the subject of this post, is the 1975-76 Calbee set.

The set is probably one of the hardest ones out there to collect due to its size (almost 1500 cards) and the difficulty of tracking down older Calbee cards in volume like that.  I`m not sure if I would describe myself as putting a set together due to those obstacles, but I did get quite a few of them this year.  In fact I now possess a little over 300 different cards from the set (and a few doubles).

I have done this through a mix of buying lots and singles here and there, mostly online.  It is hard to find large lots of Calbees from that era so I`ve mostly been getting them in groups of between 4 and 12 at a time.

The thing that really attracts me to them is the photography.  These cards are amazing - in addition to the full bleed photos almost none of the cards feature posed photographs.  There are tons of in-action shots or just candid ones from batting practice.

Some beauties include Koji Yamamoto rounding the bases after hitting a home run.  I love how this  gets both him and the dejected pitcher in the same shot. 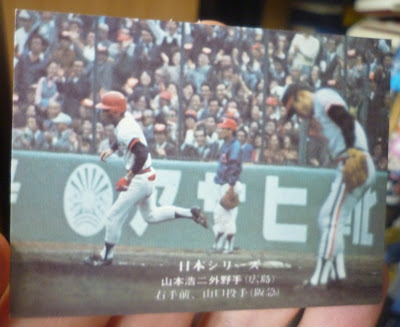 The scenery sometimes overtakes the subject of the card, which is also cool, like this one of Shigeo Nagashima being given a victory lap surrounded by fans. 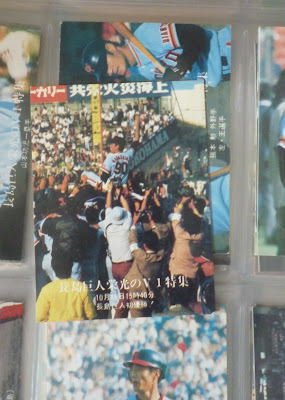 This card of Koichi Tabuchi is also pretty cool.  I like the way the audience in the bleachers seem to be shrowded in mist behind him.  Must have been a rainy night game. 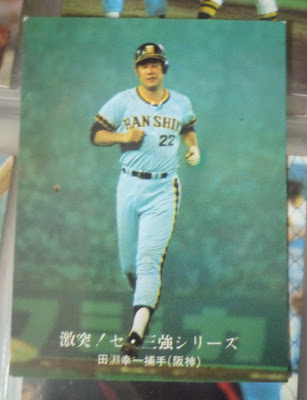 Sometimes the photos convey some unintended messages, such as this one attesting to the attendance at Crown Fighter Lions games in Fukuoka back in the day.  Guess that is why they moved. 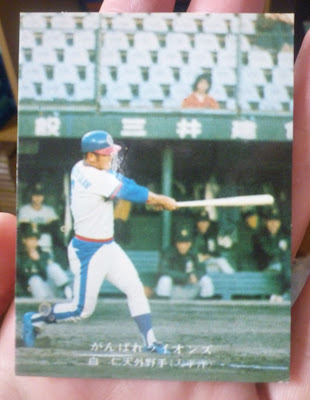 This one I like just because of the way the billboard in the upper background kind of frames the player. 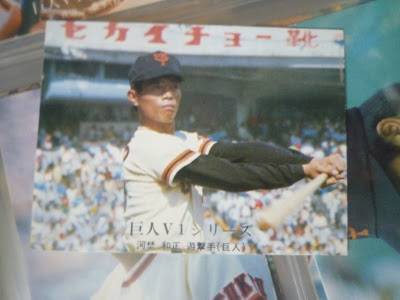 This one of Yokozuna Wajima throwing out a first pitch is also awesome. 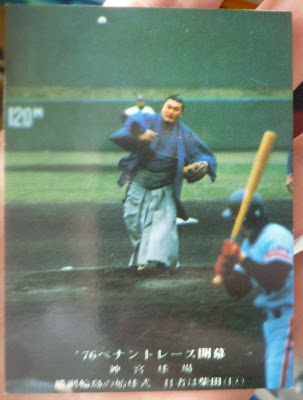 And any card with a purple Taiheiyo uniform looks cool. 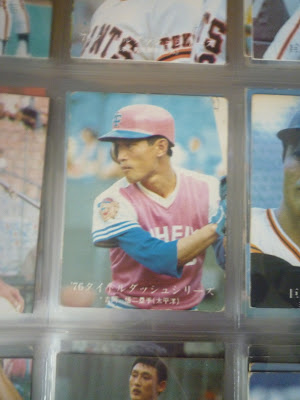 As does Sadaharu Oh`s leg kick 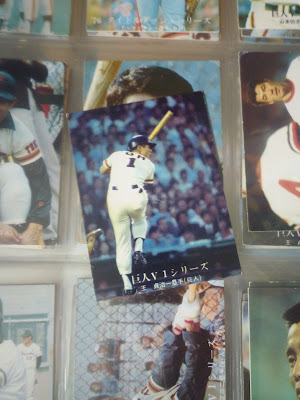 The All Star game highlight cards are all fantastic too 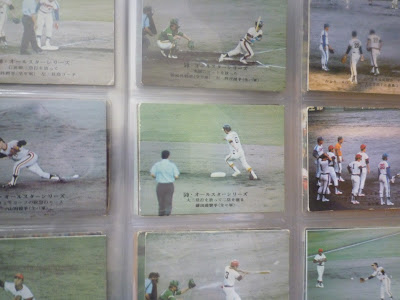 Compare these to the dregs of Topps baseball card photography from the mid 1970s (or more recent for that matter).  In addition to the lack of full bleed photos, most of them are posed shots obviously taken in spring training facilities rather than the team`s normal stadium.  You don`t get a very good feel of what Major League baseball games in the 1970s look and felt like by looking at contemporary baseball cards.  But Calbee does just that with this set, which is why I have become quite fascinated with it.

Another thing I like too is that in 1975 all Japanese baseball games were played outdoors on natural grass and dirt infields.   That looks good on cards.  One thing I actively dislike about today`s Japanese cards is that half the teams (Giants, Hawks, Buffaloes, Fighters, Lions and Dragons) play in domes, so about half the cards have photos taken indoors on them.  These photos are universally repellant to me.  The artificial grass, the flourescent lighting, the lack of dirt, it all just looks so sterile and lifeless compared to the images of games played outdoors in the 1970s (or games played today in the Tigers, Carp, Baystars, Swallows, Eagles or Marines` home stadiums).

One other thing which makes this set interesting is just how many of the biggest names in Japanese baseball history were active at the time.  It is brimming with cards of Sadaharu Oh, Shigeo Nagashima (then as a manager), Isao Harimoto, Sachio Kinugasa, Katsuya Nomura, Koji Yamamoto and a ton of other guys.