Putting some Worthless 90s Baseball Cards to a Useful Purpose 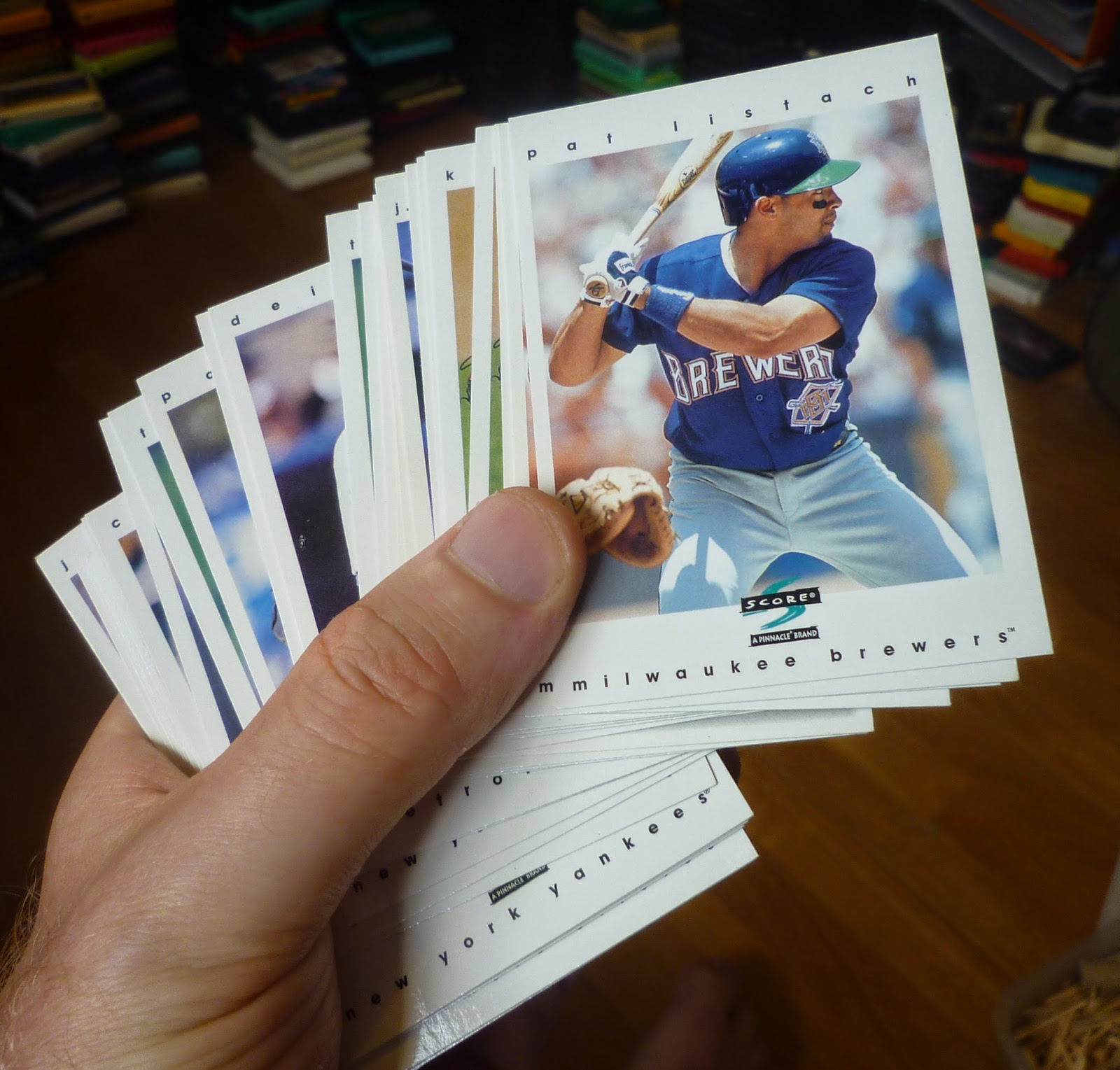 The billions of baseball cards made in the late 1980s and 1990s are an odd, if not particularly pressing, problem facing society.  These things exist.  There are too many of them.  Nobody wants them.  We`re getting kind of sick of seeing them around, some of us to the point of actually trying to organize mass burnings of them.

It is a problem we`ve faced for a while.  Even in the early 90s when these things were still being belched out of printing presses millions at a time we knew it was a problem.  We tried giving them to hospitals for sick kids to play with.  Turned out sick kids in the hospital didn`t want stacks of 1991 Donruss commons anymore than we did.

I can`t say that I`ve found a solution to this problem, but I have resolved to do my part - starting with a stack of 1997 Score cards that fell into my hands.  I have never really liked Score sets much. They were a bit innovative with their first set in 1988, being one of the first to put color photos on the back of their cards, but that was about it.  Bland designs were their forte.  Even during the worst Fleer and Donruss years (1988-1991) you could always count on Score to make a set that somehow looked worse (except maybe the 1990 one).

The 1997 set seems to have continued this tradition - massive white borders with the player and team name written in tiny, hard to read letters on the top and bottom.  I had drifted away from baseball cards in 1997 so I don`t remember this set from the year of its original release, but even if I had still been in the hobby that year I probably would have forgotten all about this set.  It is just so bland and generic and awful that its almost impossible to remember.

Anyway, enough about how bad Score cards are.  I need to divert the narrative of this post slightly in order to introduce a piece of minor biographical information about myself.  In addition to collecting baseball cards one of my other hobbies is model railroads.  I have been working on an N-scale layout of a Japanese city for a few years now, this is what it looks like: 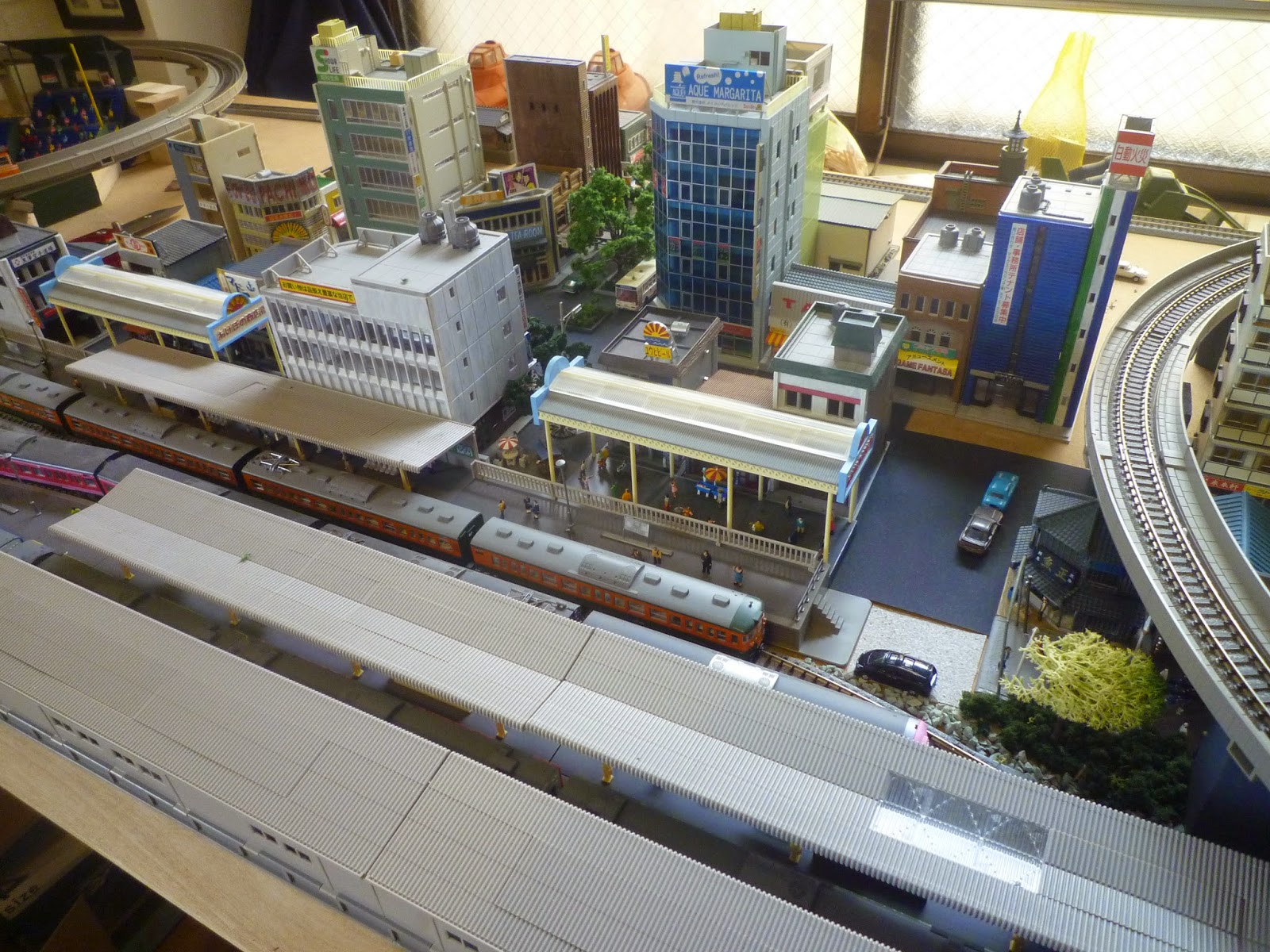 The centrepiece of the layout (in name only, its actually on the left side rather than the centre) is a baseball stadium that I am slowly constructing entirely from scratch. If you have never built a 1:150 scale baseball stadium from scratch be forewarned: it is something you will likely need at least a year`s worth of weekends to make happen.  It doesn`t look like much, but this is what I have so far: 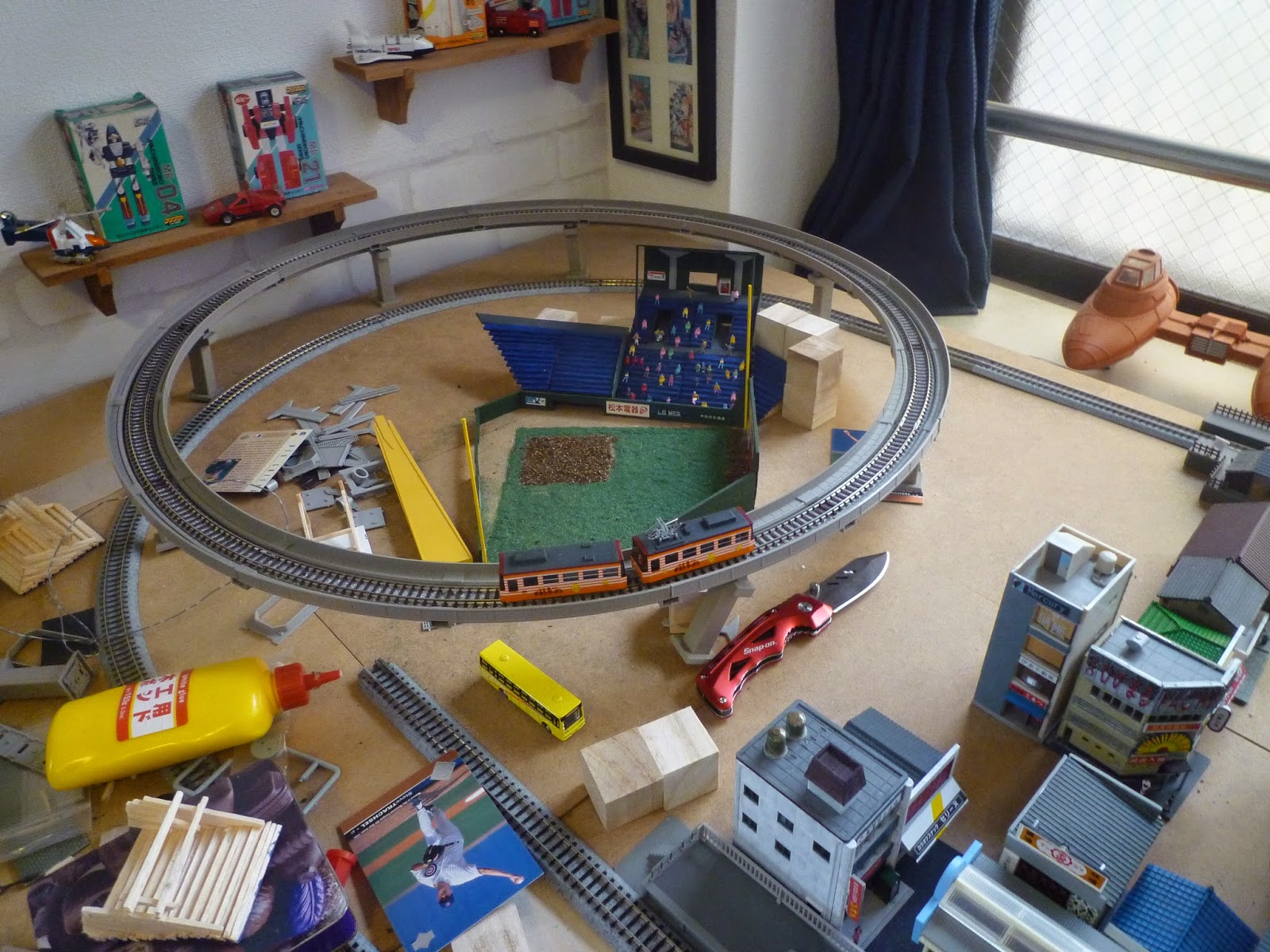 The stands on the third base side are the only part that is actually in a recognizable shape so far: 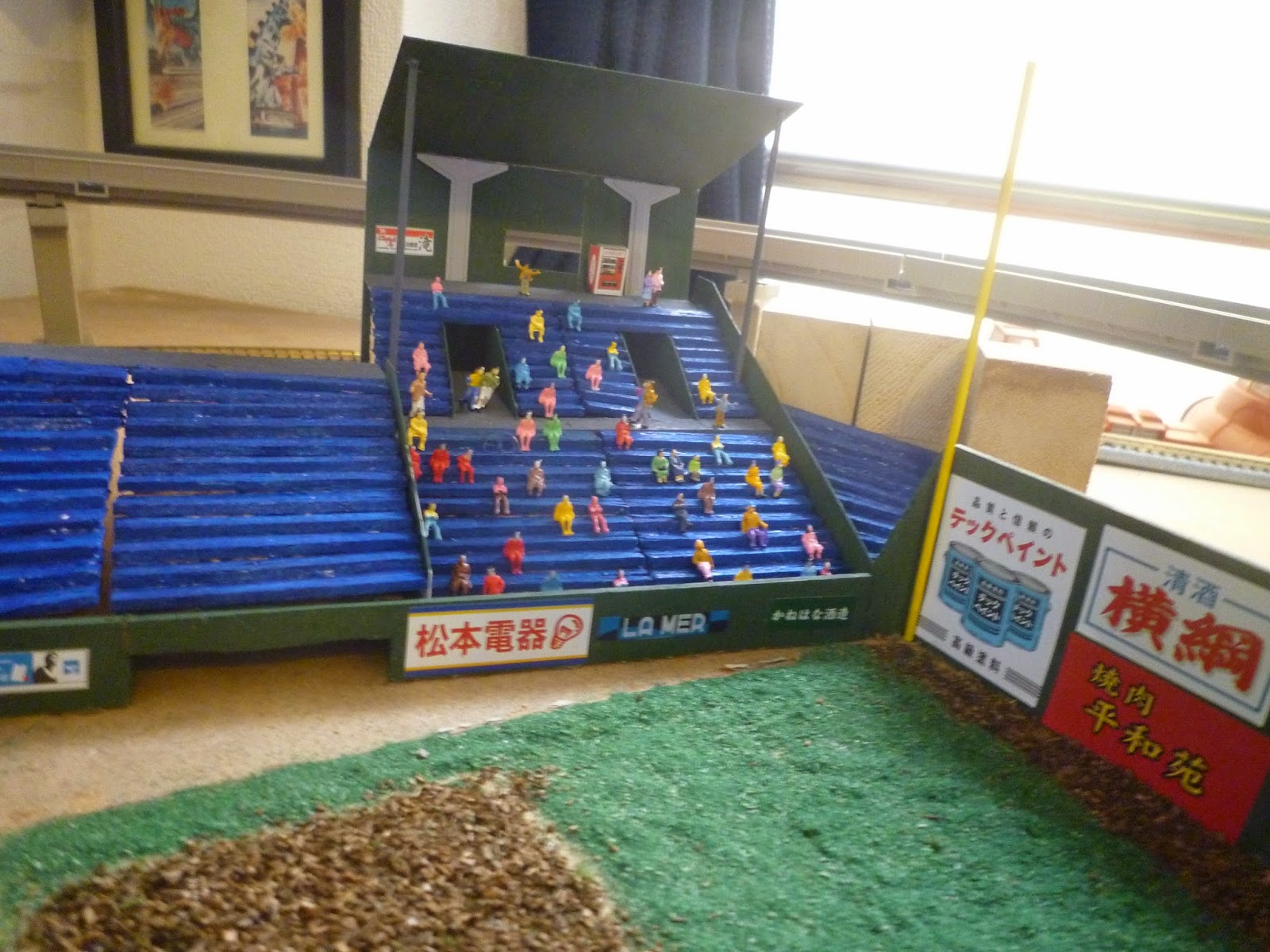 I have four main sources of building material for this project:

This is a 1997 Score Jose Rosado that will be an external wall on the stadium.  1997 Score cards are pretty good at being walls, the gloss on them is lightly applied and takes a layer of model paint like a champ. 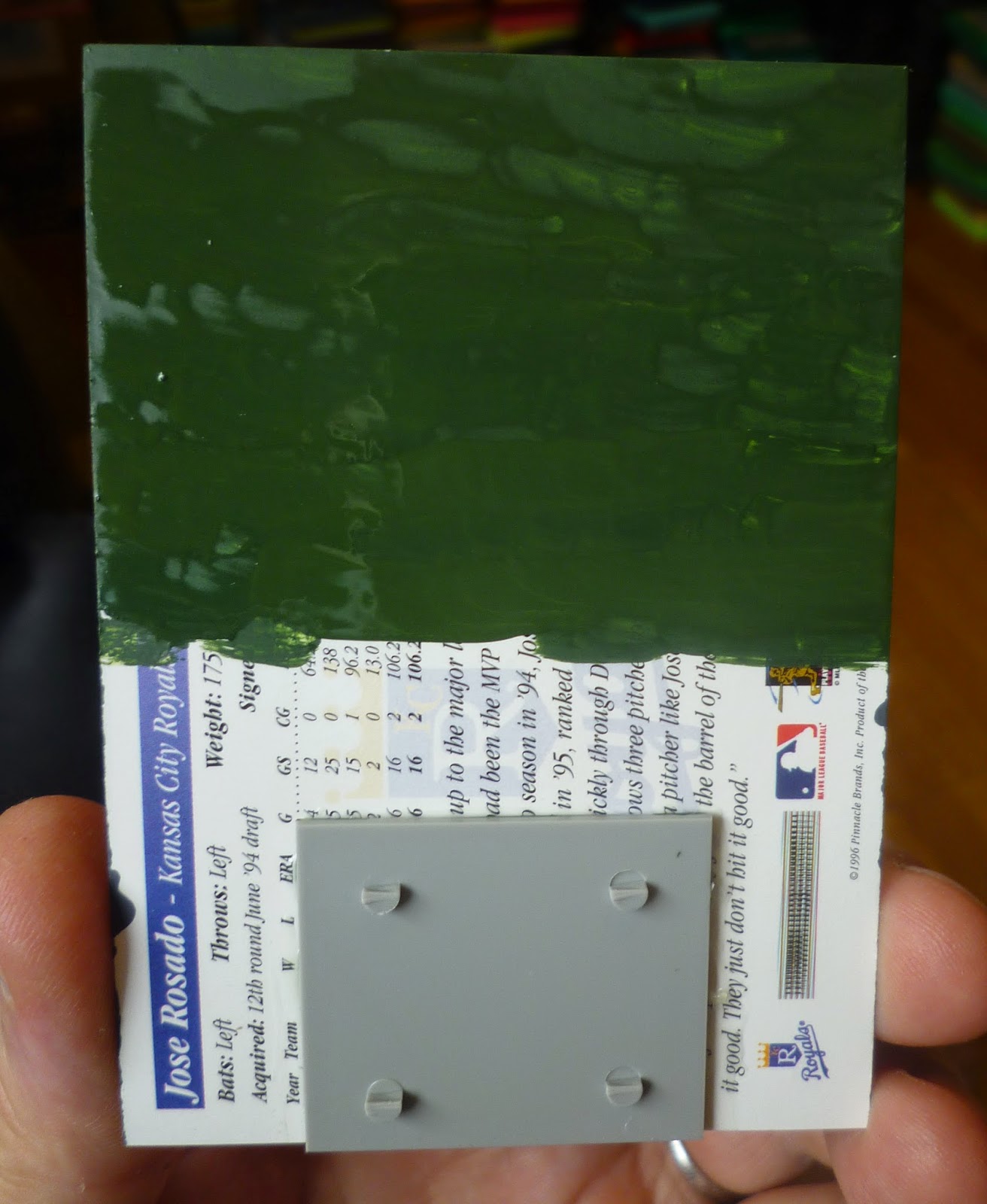 This is what it looks like from the other side, which will be the external part.  Its got a little garage door on it, another thing that it turns out 1997 Score cards can have applied to them with relative ease. 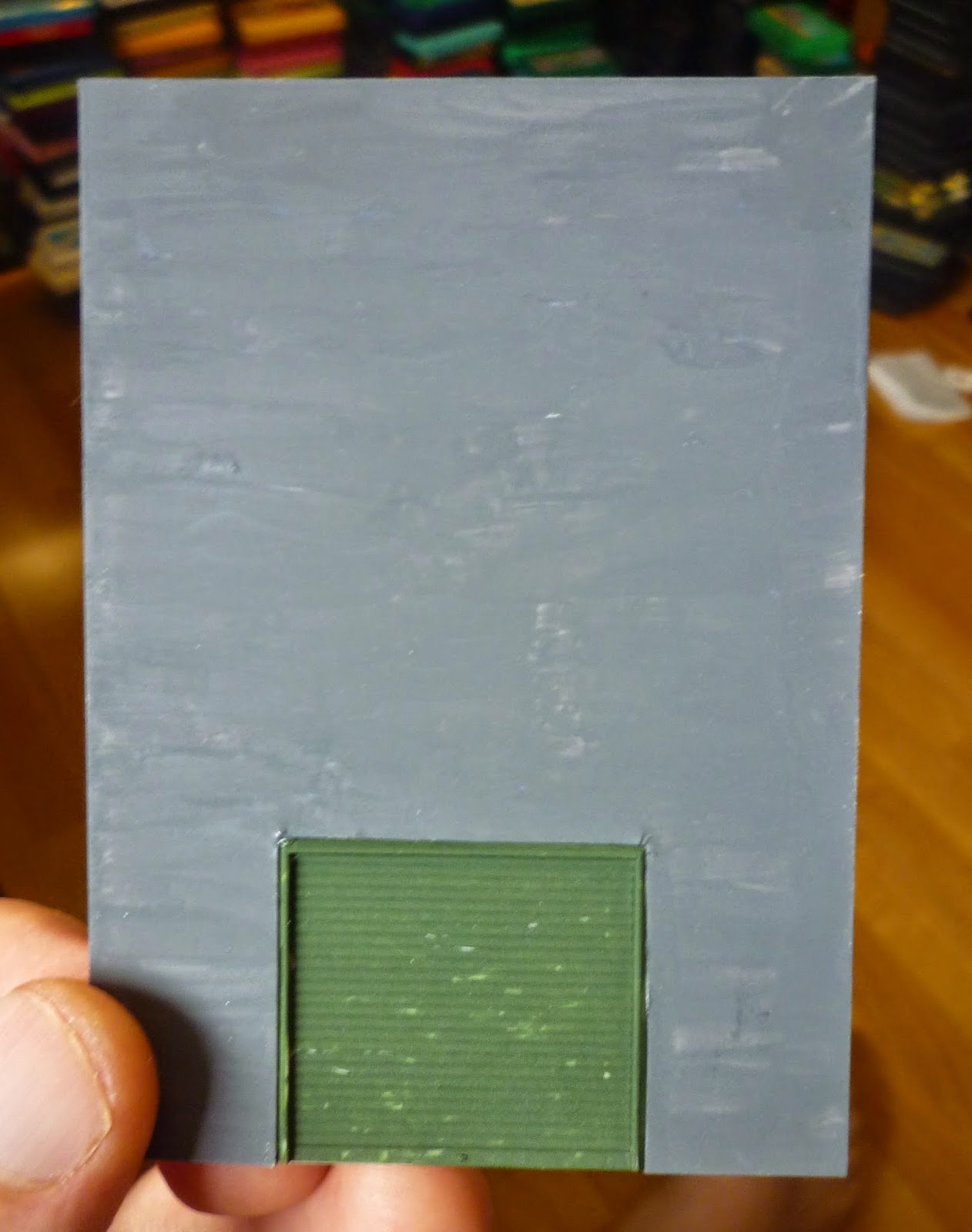 The roof over my third base bleachers is also made of parts of two 1997 Score cards.  one of them was Danny Tartabull, I forget who the other one was.  They work pretty well.  I think a Kevin Brown and Aaron Sele were used for the external wall on this section. 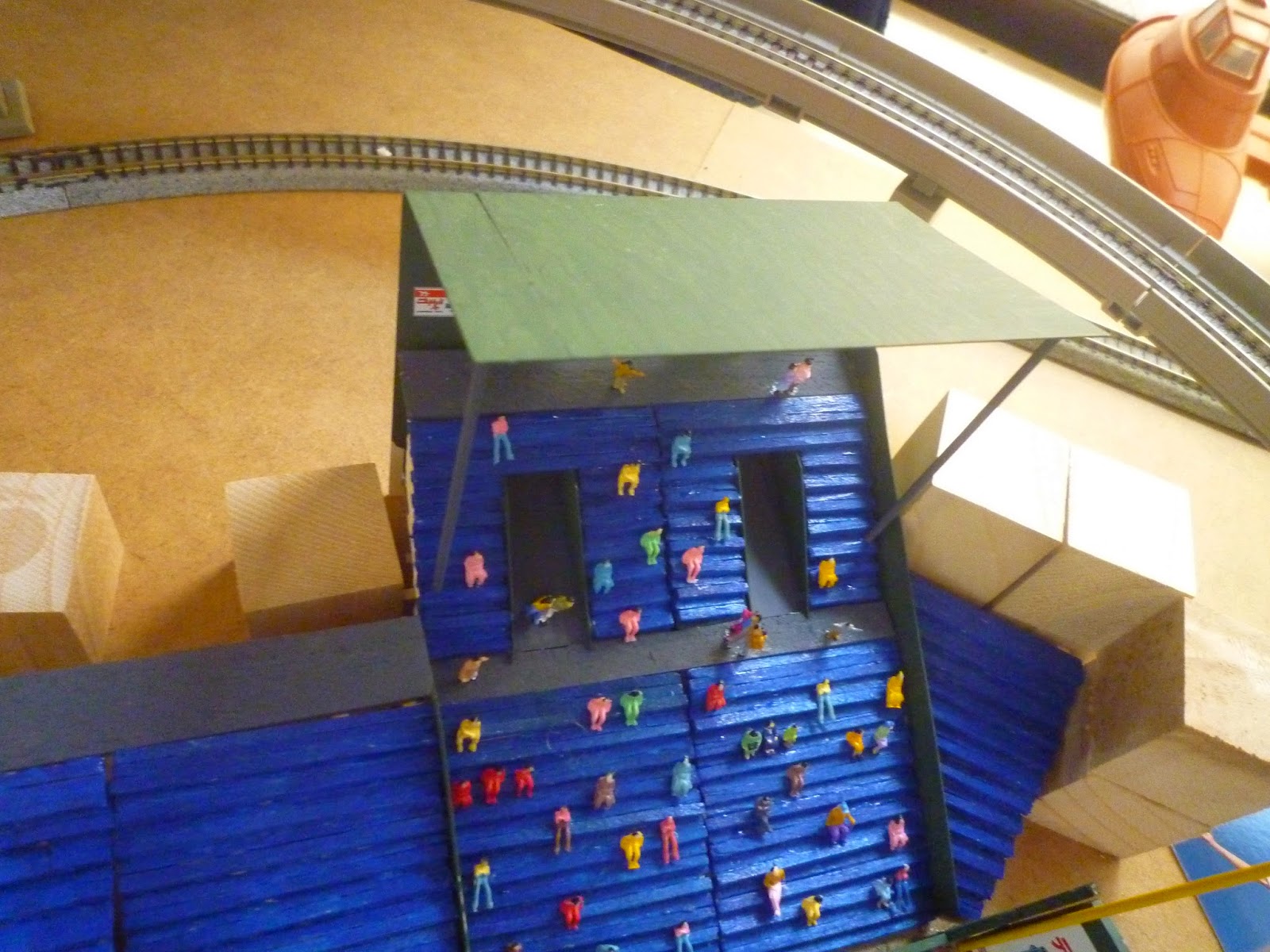 Anyway, I am taking a fair amount of pleasure from this construction project, time consuming though it is.  Partly its because having a baseball stadium in my layout will put me in good stead with the Japanese model railroading crowd, but also because I know that in my own small way this project has contributed to a tiny thinning out of the rampant 1997 Score population in a productive way.