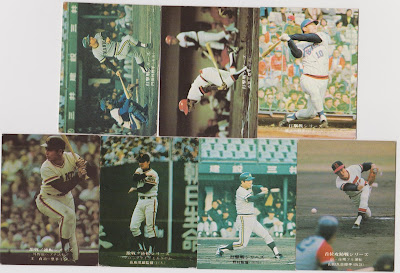 Above are a few cards from the 1975 Calbee set (not to be confused with the 1975-76 set) that I have.  You have cards of Japan's all time hits leader (Harimoto), its top three home runs leaders (Oh, Nomura and Kadota), its Iron Man (Kinugasa), its most popular player ever (Nagashima) and one of its best pitchers (Yamada).  I didn't have one handy when I scanned these but if I wanted to I could have added its all time stolen base king (Fukumoto) to the group if I had wanted to.

If you think of the concentration of key figures in the Japanese game into one set (in fact, most sets issued that decade) it is really hard to fathom - almost all of the key career record holders in Japanese history are represented here since their careers overlapped (Nagashima admittedly appearing as a manager rather than player in sets after 73, but still there).  Its like having a set with (career contemporary) cards of Babe Ruth, Hank Aaron,Pete Rose, Rickey Henderson, Willie Mays, Walter Johnson, Cal Ripken Jr and Mickey Mantle.


The interesting thing is that no NPB set in the future will ever come close to this because almost all of those records are now effectively unbreakable.  Any player who can collect hits, home runs, wins or stolen bases at the pace necessary to challenge any of them is going to be offered a lucrative contract from MLB years before that happens, so it is hard to imagine any player capable of doing so sticking around long enough.  The current active career home run leader is Shinnosuke Abe, whose career is already winding down and might not even reach the 400 plateau before the end.  Harimoto's hits record would likely have been obliterated by now had Ichiro not gone to the Majors and nobody else is even close.

So the 1970s in NPB are kind of a unique era in the history of any baseball league.  I can't think of any era in MLB history that comes close.  The dead ball era produced some pitching records that are more or less out of reach (Cy Young's 511 wins) and some non-home run batting records that will likely never be matched (Sam Crawford's career triples), while the 1920s and 1950s produced some of its most iconic figures, but the 1970s in NPB is a bit like if the top players in all those eras competed against each other and all the major career records that they set (as opposed to just a few) became impossible for subsequent generations to break.
Posted by Sean at 12:12 AM