Above is a 1964 Topps card of Ernie Banks, the great Cub who recently left us for that doubleheader in the sky.

This is not a happy baseball card.  He is trapped in there, entombed by some Ebay dealer who sent him off to Beckett a few years ago to be graded.  He needs help.  He needs to run free.

One of my collecting goals is to have all my cards grown free-range, so I have always felt particularly bad about poor old Mr. Cub, trapped as he is in there.

Therefore I am happy to announce that the much anticipated Baseball Card Liberation Front (BCLF) has struck a first blow against the Yankee imperialist dogs (er not those ones in the Bronx but more generally) in a minutes-long operation that succesfully released our brother Banks from the clutches of an evil Beckett card holder.

The operation began at 13:00 hours, the freedom fighter  using a single pair of rusty 100 Yen shop plyers (fellow freedom fighters take note: if you are planning a similar operation the rust is optional). 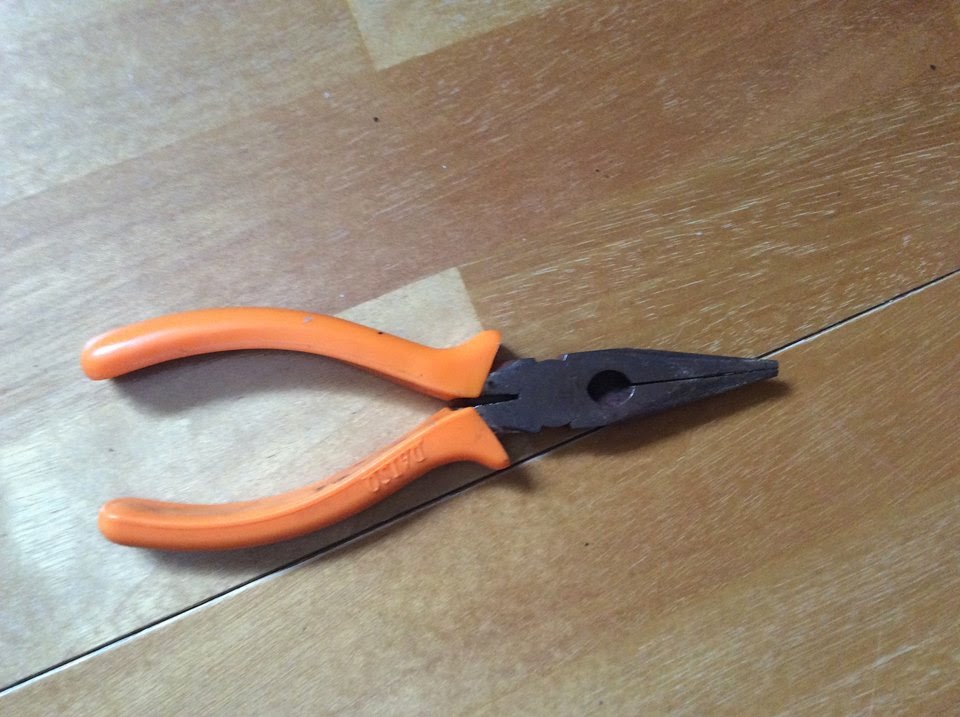 The struggle for freedom began where the card holder least expected it, in the upper right hand corner so as to avoid any risk to the innocent hostage held captive below: 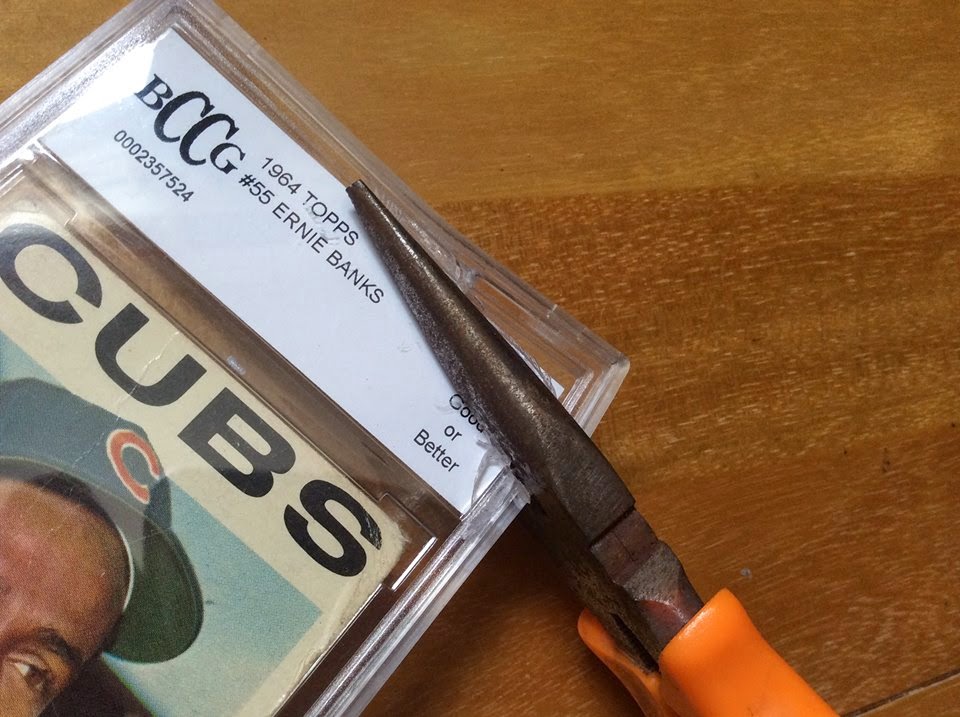 The initial snip took that corner off nicely 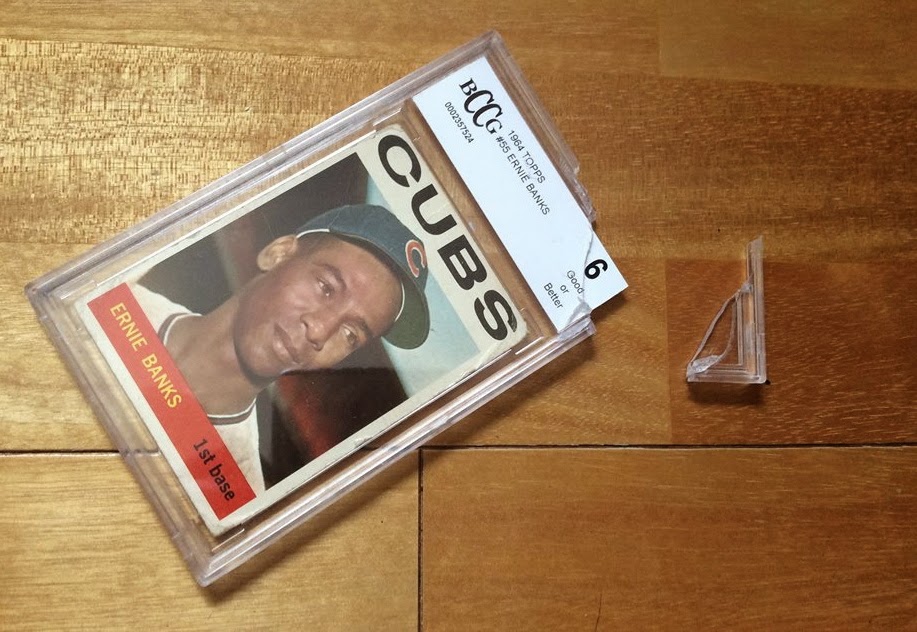 We then moved on to the opposite corner, again being careful to keep as far away from Mr. Banks as possible 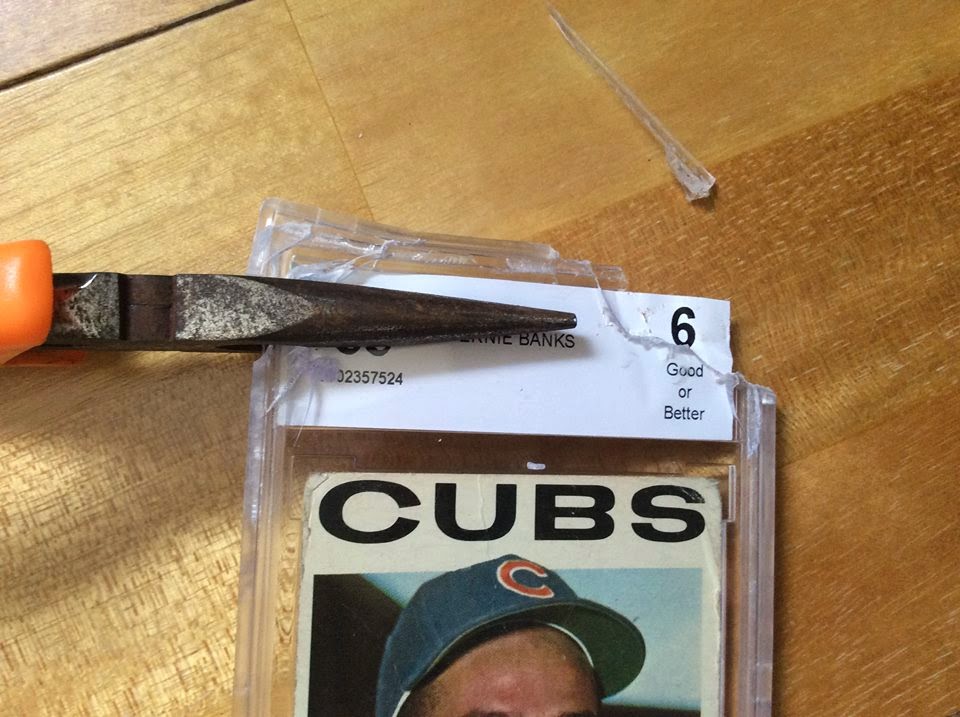 Finally, with an additional blow struck against the centre, an opening was created along the top ridge: 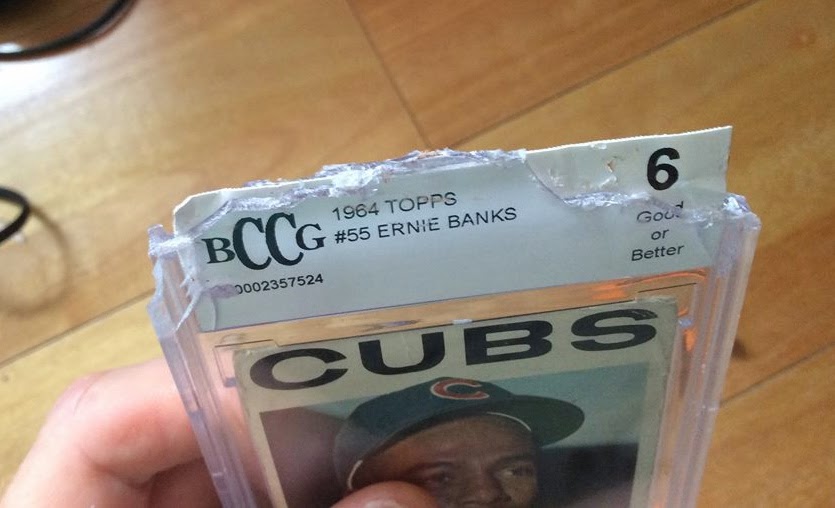 Removing the piece of paper with the condition (Good) we plunged the plyers deep into the belly of the capitalist machine of oppression (figuratively speaking of course): 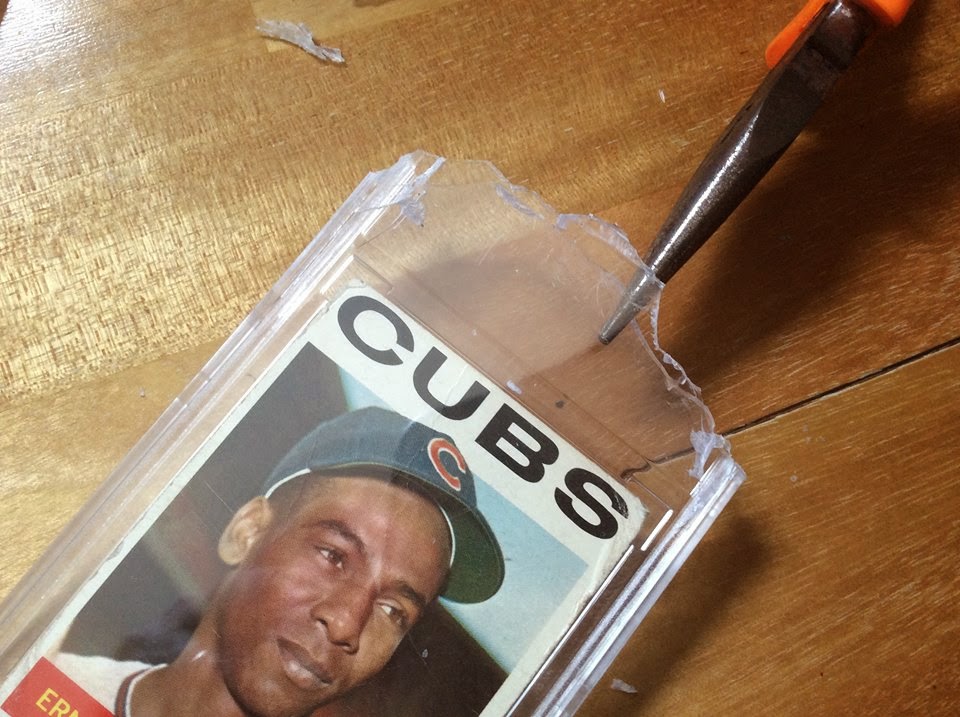 The mission ran into a slight hiccup at this point as, instead of popping the two halves of the holder apart as envisaged, the outward pressure just broke the top part in half, leaving the hostage precariously nestled beneath its jagged edge 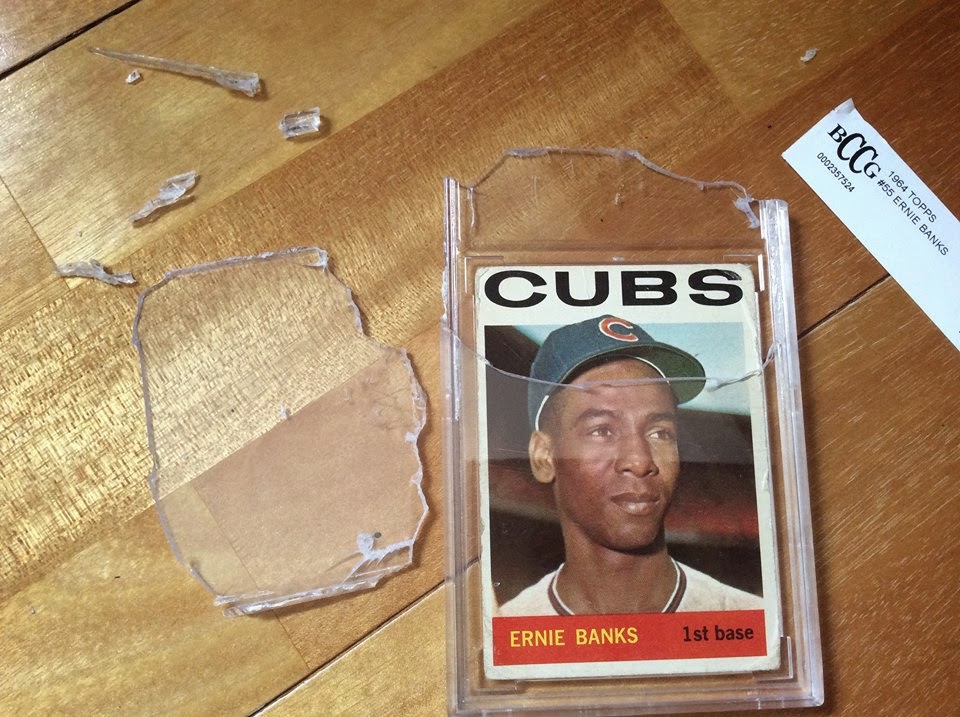 Undaunted, a bit of delicate pruning brought one corner of the card completely out of its prison for the first time in probably about a decade: 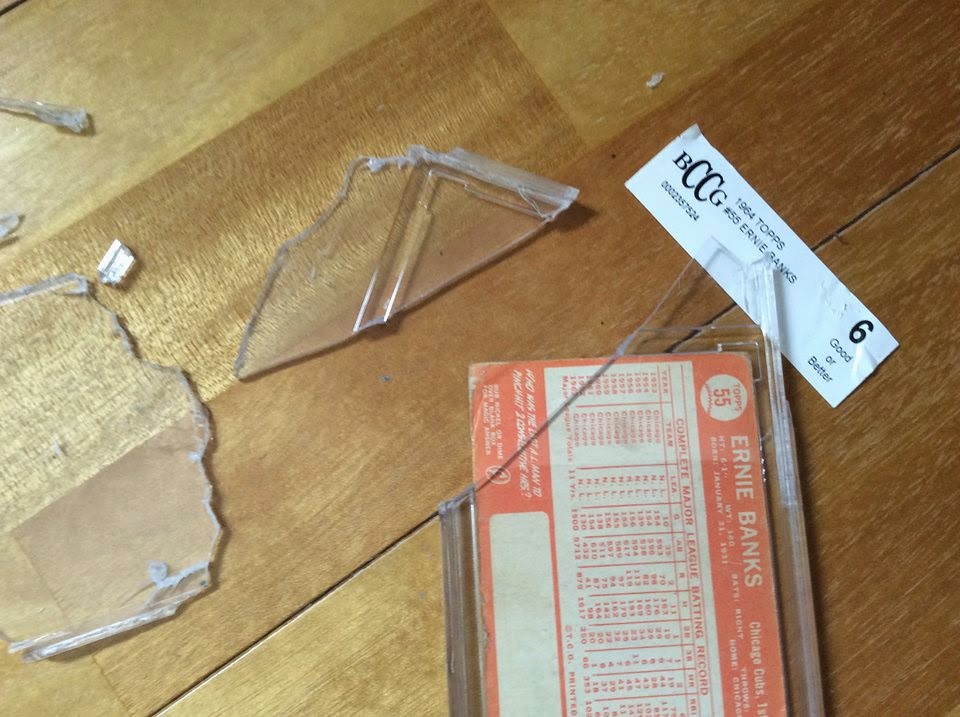 The rest of him soon followed.  1964 Topps Ernie Banks: the BCLF proudly declares you a free man (card)! 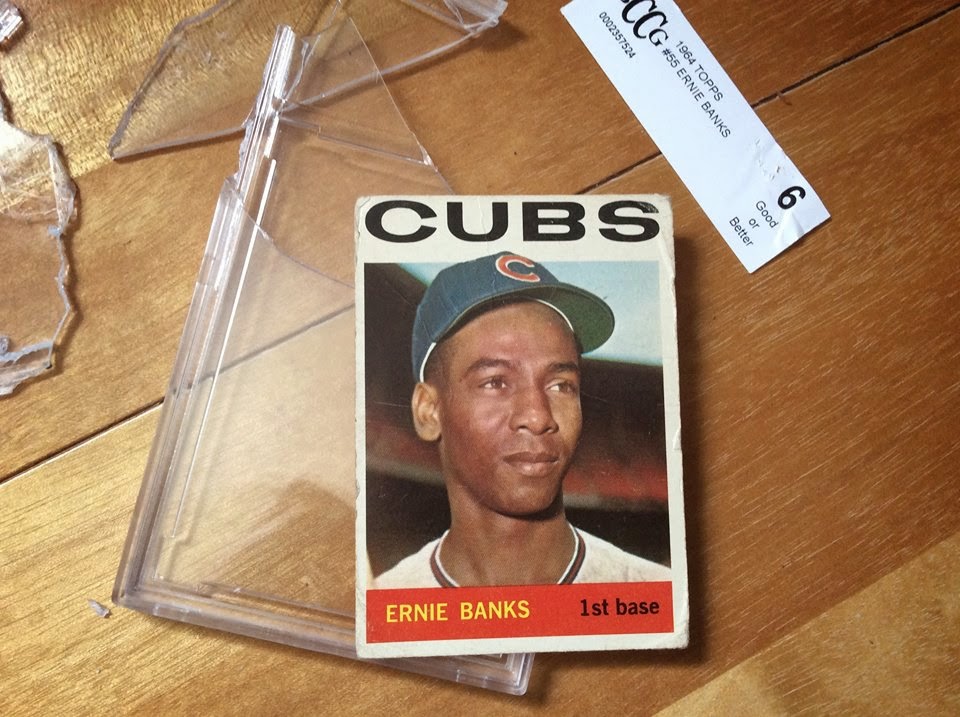 Among the privileges this entitles you to is the inalienable ability to be held in the hand of an actual human being as your creators intended for you back in 1964. 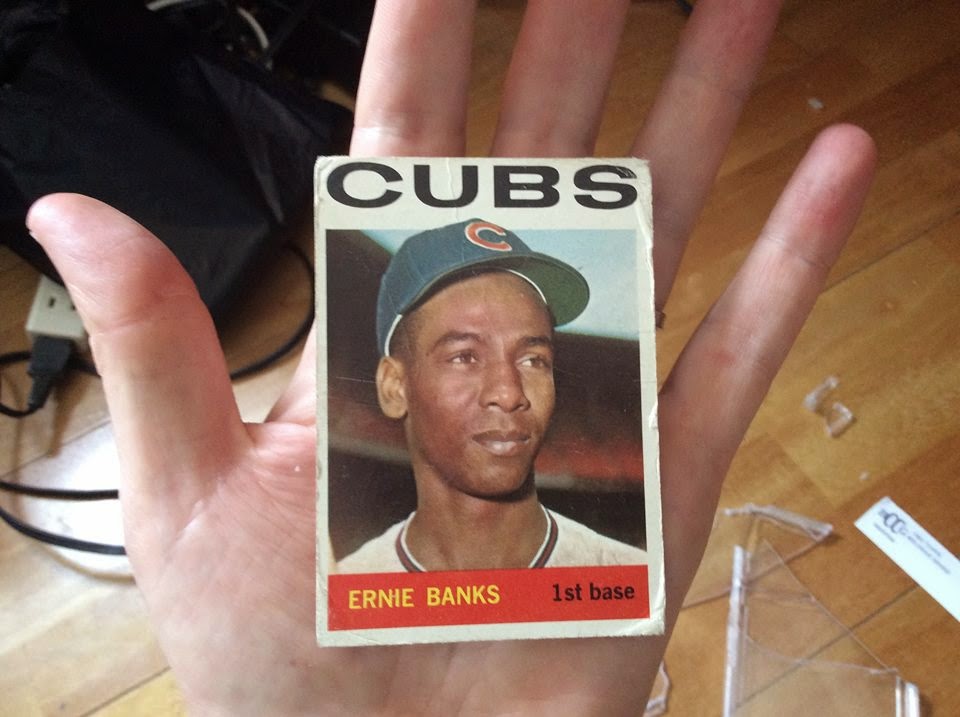 This was a sort of test operation, with the 1964 Topps Banks card in part chosen because being in Good condition there was a relatively low risk of any further damage being done.  We got him out safely.  Be warned, graded card holders, emboldened by our success in this battle we intend to move up the value chain and onto other, potentially more difficult to destroy, holders like the PSA one currently oppressing my 1964 Topps Pete Rose.

The war has begun.