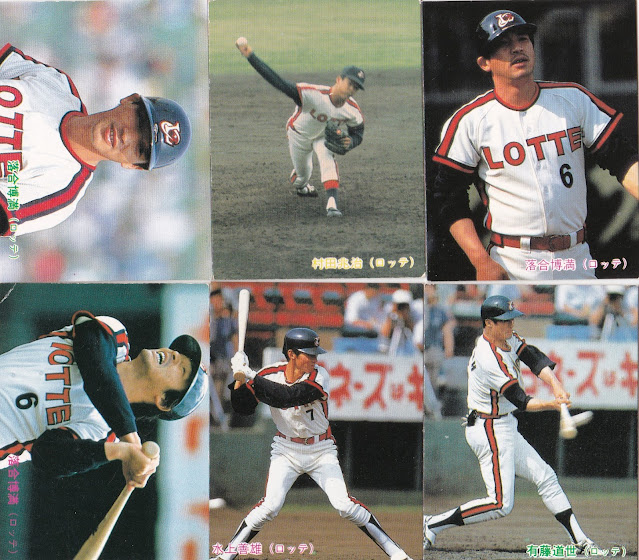 One weird thing about Japanese baseball card history is that for a 12 year stretch between 1973 and 1984 the main baseball card maker (Calbee) and the corporate owner of one team (Lotte, owner of the Orions, now the Marines) had a feud of some sort so severe that Calbee refused to produce any cards of any Orions players.

The result is that for that entire period - spanning the entirety of Calbee's golden age of the 1970s and the first half of the mini card era of the 1980s - no Orions player features on any Calbee baseball card (except the odd one who gets a cameo on the card of a player from another team).

In the US this would be the equivalent of Topps having had a feud with the owners of the Chicago Cubs and not producing any cards of Cubs players between 1952 and 1963.  That would have been weird if it had happened, right?

I really want to know more about the details of this feud but there is very little about it out there.  The main explanation given is that the main line of business for both Calbee and Lotte (then and also now) was not baseball cards or baseball teams, but rather producing snacks.  This meant that they were competitors in their main business and Calbee, not wanting to give Lotte a  backdoor form of free advertising on their cards, refused to make cards featuring Orions players. (Edited to add: as per the discussion in the comments by twycchang, the cause of the feud seems to have originated from the Lotte side rather than the Calbee side, rendering a bit of the discussion in the next paragraph redundant, but overall the fact that these two companies were in a feud remains the same).

While its easy to see the logic at work there, this explanation has always fell a bit short to me.  This was not solely a rational business decision, it feels like there must have been some level of personal animosity or just sheer spite involved in that move.  I mean the amount of "free advertising" Lotte would have received by having Orions players pictured on cards would have been pretty minimal on the one hand, while the benefit to Calbee of featuring Lotte players (and thus attracting fans of Lotte players to buy their chips) surely would have outweighed whatever slight advantage Lotte would have obtained.  There must be a bit more to this story than we know about, but what that is would just be speculation on my part.

Equally interesting is the question of why, in 1985, Calbee's embargo on Orions players came to an end.  Unlike the question of why it existed in the first place, my Japanese language Google searches do not turn up any theories about this.  Both companies were still competitors at the time, so the purported rationale (no free advertising) would seem to have still made sense if that were the actual reason for it.  I was curious if maybe there was a change in leadership in Calbee that explained the shift, but there wasn't - company founder Takashi Matsuo was still the head of the company and wouldn't retire until 1987 (at which point his son took over).  Its a bit of a mystery that I'm curious about - why did Calbee and Lotte suddenly make up with each other after such a long and seemingly spiteful feud?

Anyway, the result of the end of the feud was that the 1985 Calbee set was the first in history to feature Orions players.  There were some really important players who thus had their first Calbee card that year.  Notable among them were Hiromitsu Ochiai, probably the best player in NPB during the 1980s who won a remarkable three triple crowns.  He had played his first game in 1979 but it wasn't until 1985 that Calbee collectors got a card of him.  Japanese collectors consider his first card in the set (71) to be his "rookie card", though he actually appeared on cards in Takara sets before 1985. He also appears on a few other cards in other series. 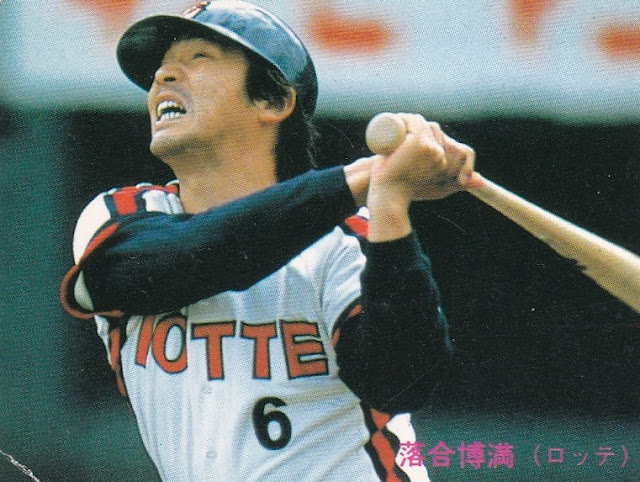 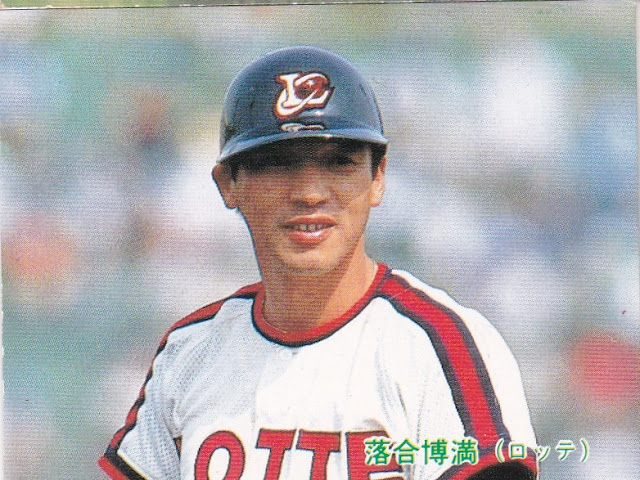 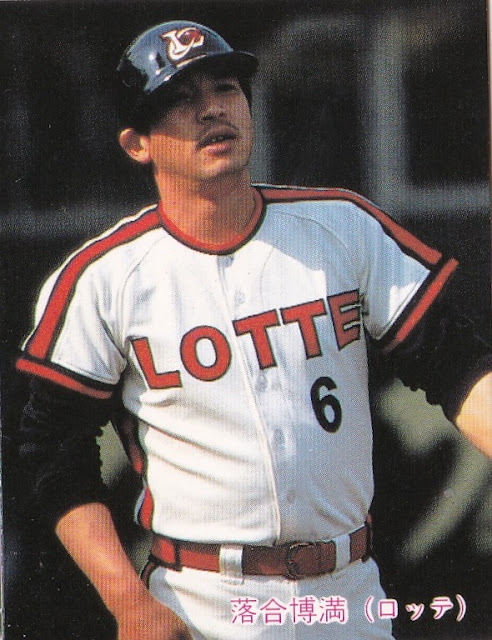 Hall of fame pitcher Choji Murata also has his "rookie card" in this set even though he made his debut in 1968 and was nearing the end of his career in 1985 (and like Ochiai had appeared in Takara and also Yamakatsu sets previously).  He is very famous in Japan for having been the first pitcher to undergo Tommy John surgery (edited to note: he may have been the second), and then making a very dramatic comeback in his career afterwards. 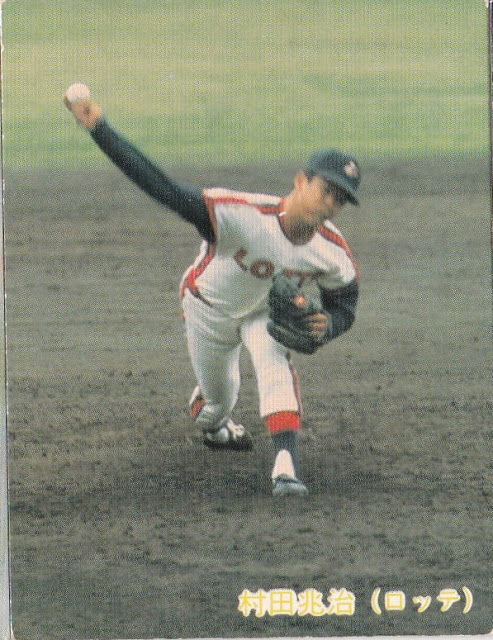 Michiyo Arito is another notable Orion who debuted in the 85 Calbee set. Unlike Murata and Ochiai he isn't in the hall of fame, but he is a member of the Meikyukai with more than 2,000 career hits.  His biggest claim to fame, at least in English language sources, is his appearance as the antagonist in the stories of other players.  He seems to have been a kind of hard headed traditionalist who just plain didn't get along with other people. Towards the end of his playing days he took over as Orions manager and famously decided to trade away Ochiai - by far the best player in the game who had just won the triple crown - because he didn't approve of his independent attitude.  The great Leron Lee, who played 11 years with Lotte as Arito's team mate (and set the career batting average record in NPB) also had some scathing things to say about his managerial style and personality (cited in Robert Whiting's book You Gotta Have Wa).  He was a disastrous manager and the team finished last place in 2 out of his 3 seasons as manager (and only second to last in the other). 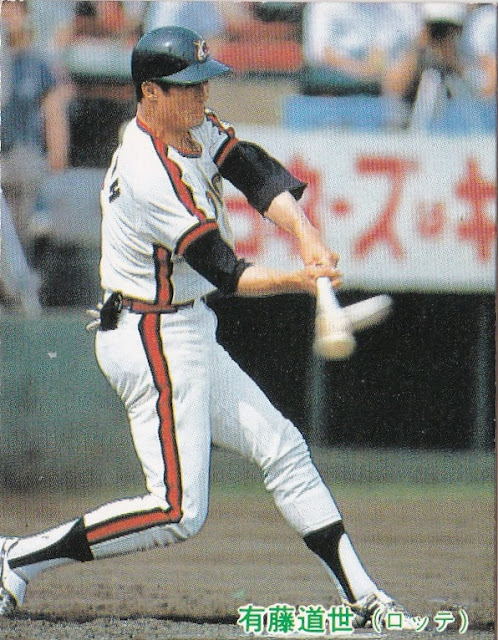 Speaking of which, Leron Lee is probably the biggest  victim of the Calbee-Lotte feud since it encompassed almost his entire career in Japan.  For reasons that I don't understand he is the only big Orions star who Calbee didn't give a card in the 1985 set.  In fact they never gave him a card at all - he played until 1987 but doesn't feature in the 1986 or 1987 Calbee sets either despite being a regular (and productive) player right up until his last season.  His brother Leon, who played for other teams, has lots of cards in 1980s Calbee sets but for some reason they never bothered to make one of Leron, which is a massive historical injustice to one of the best players in NPB during that time frame.  I don't know why that happenned - in Whiting's book it is noted that Leron wasn't very well treated by Lotte fans despite being such a great player for them, which may have something to do with it -  but I think it stinks.